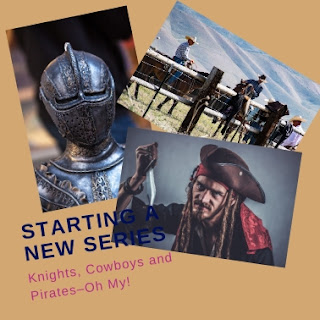 Ok, let’s get to the good part, the books themselves.

As I said, there are four books. They are The Knight of Her Heart, The Cowboy of Her Dreams, The Pirate of Her Desires, and Marina’s Story. Now, the story is based around a current day family with an intriguing ancestor that was a good witch. Her name was Marina and she lived in Boston just after the witch trials. Marina believed in true love and knew there would be three sisters coming in the late 1900’s. She left three journals behind for them to find. Each journal had a spell cast over them that would send them back to where their true love was. Seems simple, right? Well, going back in time isn’t as easy as it sounds. And writing about it, well, that presents its own problems. Each one of the sisters has a special ability that they have never discovered until they go back in time. And the tricky part is keeping up with which sister went back to which hero. Also, I must keep up with all the names that are tied to the characters. In comes the side notes on the outline.
The books in order and release dates:


The Knight of Her Heart – Released already.

Marina’s Story – to be released in late September 2020
I suggest reading them in order, that way you find out Marina’s story at the end. Her story will tie it all together and hopefully leave your heart beating a little faster as you look at a journal for yourself.


Let’s start from the beginning story, The Knight of Her Heart. In this one, I had to get acquainted with life in the early 1200’s. The intricacies of how women were treated and where their place was made this story interesting since the heroine is from current day and her view is different from the ladies of that period. This causes some issues between her and the hero. Not to mention how the other people in the story perceive her. It’s not just a step back in time, it’s a huge leap from 2019 to 1200.


On to book 2, The Cowboy of Her Dreams. Anyone who has read any of my books knows that I have a fascination with cowboys. Of course, I had to have one in the series. This one is set in the early to mid-1800’s. It’s a time period that I’ve researched for several of my books, but this one has an exciting twist that will leave you guessing all the way to the end. I did have a little bit of a struggle as to how the heroine would start her life in the old west. But once you read this book, you’ll get a giggle out of it, I assure you.
Book 3, The Pirate of Her Desires is quite a story. The heroine is taken by surprise by the fact that her dream man is a pirate. She’s always loved reading about pirates, but when she’s thrown into the life of a pirate, things becoming startlingly clear that she’s in way over her head, but maybe the hero can help with that. This book is based in the 1700’s when piracy is invading the seas. There’s a lot of adventure and excitement in this book. Sword fights and high sea drama fill the pages as the heroine struggles to find her place in this time. Can she tame the pirate captain?


So, you’re probably wondering why there is a 4th book if the first three take care of my fictional heroes. Well, the last book is about Marina herself. She’s the one that started the whole process and her story needs to be told. She is a kind soul with a magical power that transcends time, quite literally. And her search for the love of her life takes her on many adventures as she works on getting the process just right. Not to mention the tensions of her own time period. And considering she’s a witch in a time when witches aren’t exactly welcomed, she must be careful how she comes back and where.

Of course, the journals are special and the abilities that each sister has is unique to the individual. Each story will pull you into the time period that they go back to and give you a look at life during that time. I tried to keep things as close to real as possible, but of course, this is a work of fiction. I had to give you something fantastic to give it that punch. The characters I’ve created for this series have their own set of problems and quirks that make them different. That sets each book apart. My goal is to send the reader to another place and time, if only for a moment. Maybe you’ll grab an old journal and write in it. You never know, Marina could’ve touched it with her special brand of romance… 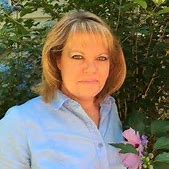 Stephanie picked up her first romance novel in her early teens and fell in love. She began to pen stories in notebooks in her teens and throughout her twenties. It was in 2012 when she decided to publish her work and let the world in on her version of romance. Now she has 50+ books published and many more in the works.

A busy woman, she's a accountant, children's minister, wife and mother. Her life may be busy, but when she sits down at her laptop the world slips away and she goes into another place. Sometimes it's a ranch full of horses, or back to the Civil War saving a heroine find her love, but as always, she'll find romance even in the most remote places.

All of her books are clean, wholesome romances, some even dubbed as Christian romances. Her books range from western, historical, time travel, Christian, and she might even dabble in a little paranormal from time to time.