I had the great good fortune to be born in the American South into a wonderful family whose idea of a good time was to gather on the front porch and tell jokes and stories.  Also, it’s so stupidly hot in the South that people often go nuts and decide to murder each other.  A winning combination of influences for a mystery writer.
I grew up in the large city of Greensboro but moved to the much smaller town of Mt. Airy to take a job as an elementary school librarian. Mt. Airy is Andy Griffith’s hometown.  I live in Mayberry!  I don’t think you can get much more Southern than that.

So of course, my two-mystery series are set in the south.  In the Madeline Maclin Mysteries, my PI is an ex-beauty queen, struggling to overcome a childhood filled with dreadful Little Miss pageants.  She’s also trying to keep her agency going while attempting to reform her con man boyfriend, Jerry Fairweather, whose shady associates always show up to complicate Madeline’s cases.

My Grace Street series is set in the large fictional of Parkland, North Carolina.  Having fallen on tough times and dealing with the loss of his little daughter, Lindsey, PI David Randall comes to live in his friend Camden’s boarding house at 302 Grace Street.  Cam is a talented psychic, but has a difficult time dealing with his visions.  At 302 Grace, Randall meets the lovely Kary Ingram, who decides she’d like to help on his cases, especially if she can wear a disguise. Things take a paranormal turn when Randall begins to see and hear Lindsey’s spirit.
A variety of tenants live in the house, including Rufus Jackson. Rufus knows hundreds of Southernisms, which gives me a great excuse to share them with the world.  Here are a few pearls of wisdom from Rufus.  “He looked like Death eatin’ a cracker.”  “He’s so dumb he could throw himself on the ground and miss.” “Load your brain before you shoot off at the mouth.”  “She’s three gallons of crazy in a two-gallon bucket.”
Having a boarding house as a central location allows me to move characters in and out as the story requires.  It also provides my characters with a big front porch complete with a porch swing and rocking chairs where everyone is welcome to pull up a chair and sit a spell. But everyone is looking for the grace that comes from a very Southern theme: family.  The warm feeling of belonging to a group of people is something I believe everyone wants and needs.
With Lindsey’s guidance, Randall continues to put his life back together.  As all these characters solve mysteries and resolve their emotional issues, they will discover that even though they aren’t related by blood, the Grace Street family is the family they always wanted and always needed.
How sure am I that everything will work out?  As Rufus would say, “As sure as a thumbtack lands point side up.” 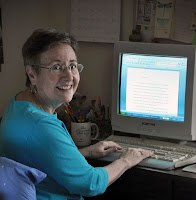 Jane Tesh is a retired media specialist and pianist for the Andy Griffith Playhouse in Mt. Airy, NC, the real Mayberry. She is the author of the Madeline Maclin Series, A Case of Imagination, A Hard Bargain, A Little Learning, A Bad Reputation, and Evil Turns, featuring former beauty queen, Madeline “Mac” Maclin and her con man husband, Jerry Fairweather. Stolen Hearts is the first in the Grace Street Mystery Series, featuring PI David Randall, his psychic friend, Camden, Randall’s love interest, Kary Ingram, and Cam’s career-driven girlfriend, Ellin Belton, as well as an ever-changing assortment of Cam’s tenants. Mixed Signals is the second in the series, followed by Now You See It, Just You Wait, and Baby, Take a Bow. Jane’s mysteries are all published by Poisoned Pen Press, located in Scottsdale, Arizona. Butterfly Waltz is her first published fantasy novel from Silver Leaf Books, followed by A Small Holiday, The Monsters of Spiders' Rest, and Over the Edge. All of Jane’s books are on the light side with humor and romance.