HOW TO START A NEW SERIES WITH OLD CHARACTERS 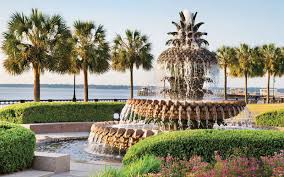 Since my new publisher, Severn House, wanted this book to pick up where my last series (Secrets of the South) left off, I first hit the road in search of the perfect location. For my PI on the run from a violent past, I selected the coastal city of Charleston with its cobblestone streets, trees shrouded in Spanish moss, and hordes of tourists. Kate Weller has plenty of spots to duck out of sight as she investigates crime under a new identity. Years ago, I fell in love with those ancient trees and dark alleys on my first trip to the three-hundred-year-old city. But by my second or third visit, I realized the past hadn’t been walled off into a museum but has nurtured each new generation. Charleston is one of the few places where doctors and lawyers, students and professors, artists and waiters coexist with horse-drawn carriages and haunted history tours. For the pivotal scene between my murder suspect and his son, I chose Shem Creek Park, across the Cooper River from downtown. Shrimpers still venture out each morning to cast their nets and sell their fresh catch at the dockside market, like fishermen a hundred years ago. For the palatial home of my murder victim, I chose the slow-paced barrier island of Kiawah with its fiercely protected privacy. I had so much fun staging the pivotal climax amidst palm trees and sandy beaches.

Next, once you’ve found the perfect setting for your new series, you must up the stakes for your characters, both carry-overs and new. Don’t rely on the same old conflicts to keep the pace lively. Deepen your characters’ motivations by creating more dire consequences should they fail. Depending on the length of your novel, introduce one or two new main characters to the story. In addition to complementing the main plot, these new characters should have their own agendas that carry-over into the next book. Readers love a series because of the chance to revisit beloved characters. But to keep them turning the pages, you must constantly introduce fresh ideas into your story lines. The old and new, the past and the present, each book picks up where the last leaves off and heads for the stars….just like the city of Charleston.

Mary Ellis has written twenty-five novels including Amish fiction, historical romance, and suspense. Her most recent mystery, Sunset in Old Savannah has been nominated for a Bookseller’s Best Award and the Daphne du Maurier Award for 2017. In August, Severn House will release Hiding in Plain Sight book one of Marked for Retribution Mysteries. In January, Kensington will release her novella, Nothing Tastes So Sweet, for the Amish Candy Shop Anthology. Social media:  www.maryellis.net or http://www.facebook.com/Mary-Ellis. Author/

Email ThisBlogThis!Share to TwitterShare to FacebookShare to Pinterest
Labels: Amish Candy Shop Anthology, Hiding in Plain Sight, HOW TO START A NEW SERIES WITH OLD CHARACTERS, Marked for Retribution Mysteries, Mary Ellis, Nothing Tastes So Sweet