Are you too Late to NaNoWriMo2017? 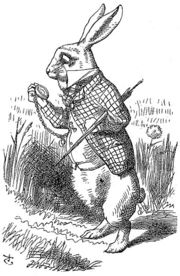 Are you wearing a waistcoat, running around and muttering "Oh dear! Oh dear! I shall be too late!" like the White Rabbit in Lewis Carroll's book, “Alice's Adventures in Wonderland?”

Have you always wanted to participate in National Novel Writing Month that happens every November? Do you think you’re too late? Rest assured you're not. You’ll be joining me at the writing party of the year. Here is the link to set up your free account.

There are lots of reasons to participate. According to an article in Publishers Weekly, Jason M. Hough, who wrote a draft of his novel The Darwin Elevator (Del Rey, 2013) during his second NaNoWriMo, says the program forced him to let go of the idea of an ideal creative atmosphere. “In four years I wrote eight pages total. I wouldn’t sit down to write unless I felt like all the planets had aligned and the conditions were perfect. You learn that you have to just fight through that stuff and get the words on the page.” Later in the article it states, “After Hough finished his draft of The Darwin Elevator, he spent some years revising it. 'There’s probably not a single sentence that isn’t unchanged.'” 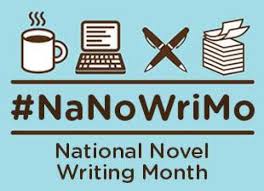 Are you still concerned about being too late to start? Sign up so you are accountable to writing each day. If you start today, November 9th, you need to commit to writing 2,273 words per day to have over 50,000 words by the end of the month. I’m in this boat with you, paddling/ typing as fast as I can.

Get off social media for the rest of the month. The time you spend on Facebook, Twitter and Instagram is better spent in writing toward the 50,000 word goal. Tell everybody you're taking a social media break.

You’ve got this. You can do it. Join me and make this the year you complete NaNoWriMo.