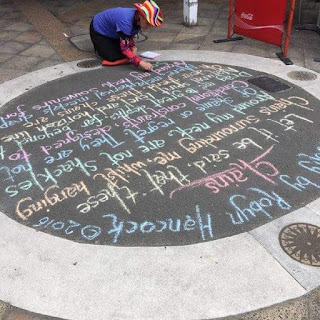 I am a multi-media poet who writes about anything and everything, forever contemplating different ideas to present my poetry.  When I get an idea for a piece of writing I will briefly make notes in my ‘drafting book’ or mobile phone. I then revisit and refine the initial notes, crafting them into a poem. The duration from the ‘spark of inspiration’ through to the final product varies extensively, along with the genre and structure.

Whilst I love performing my poetry, I really wanted to give it the exposure I felt it deserved, beyond the internet and publication in books. It took several attempts of busking and placing copies of my work around the main town centre before I came up with the idea of using chalk on the sidewalk, nearly four years ago now. 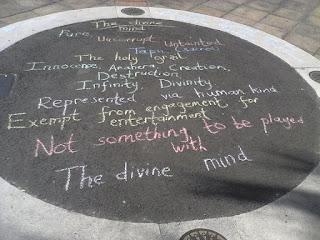 The whole point of doing chalk poetry is to make writing, literature accessible for everyone and not just the selected few.  I enjoy adding to the urban tapestry of everyday life, offering insight and creative inspiration without being obtrusive. It took a couple of years to develop and hone the execution of my work so that it had an effortless appearance that was distinctive and easily recognised as my work.  There is some variation in the layout, depending on the available space but the font is very uniform to allow clarity and ease for the reader who may only have a few seconds to glance at it before moving on.  As writers it is important to consider the needs of our readers, for they are essential in the entire process.

In order to keep the concept ‘fresh’ I vary the locations, including a blackboard situated outside the front of a disused shop next to the town library.  After chalking out a poem, I post the images online.

Many of the local residents are supportive of the concept, giving positive feedback. 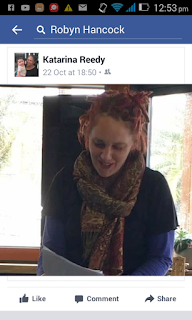 Born in Whakatane, New Zealand, Robyn Hancock was raised in Gisborne for most of her childhood.  At the age of seven, with the aid of her grandmother’s typewriter and Robbie Burns books, a career in poetry was forged. The development of her on-stage persona began, debuting at the Waikato University Capping Review, in the mid-1990s. Moving to Auckland became the catalyst for performing at various open mike events, including Poetry Live. Making the journey in 2000 to England created many opportunities as a writer and performer. Whilst living in London, she became part of the underground arts scene combining her passions of abstract art, multi-media publication and performance poetry. Coming home in 2011, accompanied with her son and partner, she returned to the stage shortly afterwards.  Attempts to busking lead to the birth of her chalk poetry, which is often woven within Gisborne’s town centre. Recent achievements include being published in www.headlinesnz.wordpress.com Turanganui Poets Collective, Volume 1(hardcopy) and exhibiting video footage and images in the Random Artists, London, and exhibition in November 2016.