Turn the World on with Your Writing

Last week, I was saddened to hear of the passing of Mary Tyler Moore. She was a personal hero of mine and judging by social media comments last week, I am not alone. Through her work, she encouraged women to be strong and independent. As a high schooler watching the  September 1970 pilot show, I was enlightened by her Mary Richards character. At a time when women were breaking out of the mold of graduating from high school to become someone's wife, Mary Richards was a soft feminist, daring us to be our own person before walking down the aisle.

It never occurred to me then, but there were female writers on this show which is why it resonated with it's fan base. However, the show was rejected by critics. Time magazine called the show a "disaster." Like all authors know, critiques are just an opinion and have very little to do with ultimate success once a fan base is developed. The MTM show was ground breaking, and I think it had to do with the fact that the show had more women writers than ever before. It was a time when women were breaking career barriers. Jennifer Keishin Armstrong's book, Mary and Lou and Rhoda and Ted: And All the Brilliant Minds Who Made TheMary Tyler Moore Show a Classic, captures much of the behind the scenes of the show's memorable characters. 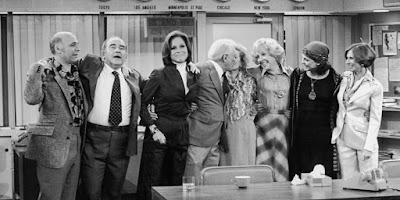 Each author wants these kind of successful characters for their fans. Take a page from Mary Tyler Moore's writers and develop a strong lead with flawed secondary characters. Develop characters that will "Turn the World on with your Writing."

Email ThisBlogThis!Share to TwitterShare to FacebookShare to Pinterest
Labels: Annette Cole Mastron, Mary and Lou and Rhoda and Ted: And All the Brilliant Minds Who Made TheMary Tyler Moore Show a Classic, Turn the World on with Your Writing