Editing Genius and Your Writing

Until I watched the recently released movie Genius, I didn't know the name Maxwell Perkins. Escaping the sweltering heat in a cool movie theatre one afternoon, I was mesmerized by this movie. With an outstanding cast led by Colin Firth, Jude Law, Nicole Kidman and Laura Linney, I was not disappointed. The movie starts in 1929, when Maxwell reads The unpublished Thomas Wolfe original offering that had been passed around the publishing houses of New York City at the point until it landed on Perkins' desk.
What the movie didn't tell was Perkins, a Harvard graduate, began his career in the advertising department at Charles Scribner's Sons publishing house in 1910. He moved to the editorial department in 1914. With that move, American literature was forever impacted. We are all better for Perkins's ability to find undiscovered authors who were often rejected elsewhere. As his character says in the movie, "my only job is to put good books in the hands of the readers."
It's so interesting to get a glimpse into publishing in 1929  before our world of electronic submissions.  Authors actually knew their editors, and editors knew their authors. Editing was done with a red pencil. Volumes of edited papers were typed up by a secretarial pool of typists. Through the editorial process, a new author states, "I bring you stuff wretched right from my gut." Perkins reassures the author, "the book belongs to you...that's what we editors lose sleep over, you know. Are we really making books better or just making them different?" Profound.
Five years after joining the editorial staff at Scribner's, he set himself apart by signing F. Scott Fitzgerald and although it had been rejected within Scribner's, Perkins worked with the author on revisions. Perkins then garnered support in the publisher's house and This Side of Paradise was published in 1920. It was the roaring 20's with the Great Depression approaching. Fitzgerald's publication could easily be paired with the arrival of new American authors with different writing styles. The Great Gatsby followed in 1925. Through Fitzgerald, Perkins met Ernest Hemingway. Perkins fought for Hemingway's first book, The Sun Also Rises, and it was published in 1926, even though traditional editors objected to the profanity in the book. Perkins was a rebel in the editorial publishing world. A Farewell to Arms followed in 1929.
His editorial skills were tested in his relationship with Southern author, Thomas Wolfe. His first book, Look Homeward Angel had to have 90,000 words cut to be published in 1929. His second book, Of Times and the River brought more challenges for Perkins. 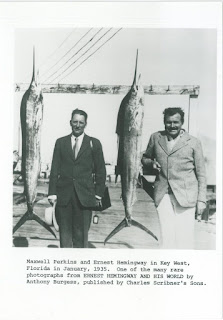 Max Perkins was noted for his courtesy with a professionalism that was able to discover new authors. He recognized unique writing that readers wanted to read all while developing writers as few editors did, or do. In watching the movie, I was intrigued by Maxwell Perkins. Many books have been written about Perkins's relationships with his authors. There are numerous books based on letters between author and their editor, Maxwell Perkins. Fascinating. It makes me wonder if Fitzgerald, Hemingway, and Wolfe would have found publishers in today's world if publishing.
The movie didn't touch on one of Perkins greatest authors, Marjorie Kinnan Rawlings. Women authors in this era of publishing were few. Rawlings's, The Yearling was awarded the Pulitzer Prize in 1939. Rawlings and Perkins had a special relationship. A Southerner from Florida, she would send him oranges from her citrus groves. He would encourage her writing by sending her nonfictions, which she enjoyed reading while writing. Their correspondence between editor and author can be read in the book, Max and Marjorie.
The movie Genius was based on A. Scott Berg's, book, Max Perkins: Editor of Genius. In order to write the screenplay for the movie, John Logan had to do what the Perkins character of the movie had to do, edit a book to tell the story, so the movie audience would want to watch the movie. I think Maxwell Perkins would have found that ironic.
Let me know what you think of Genius.