How Do You Keep Writing When Disturbing Events Occur? 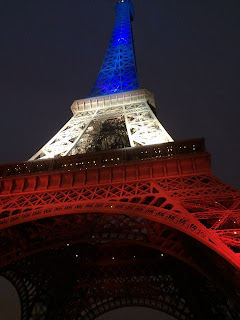 Today is Thanksgiving in the United States and I'm thankful to be writing, again.

I was writing a chase scene in my "work in progress" book when I learned of the coordinated bombings and shootings in Paris on November 13, 2015. Like 9/11, it was an ordinary day with no indication of the terror that was going to be felt throughout the world. As was the rest of the world, I was glued to my television, watching the coverage as it unfolded. I was struck by the horror of the event and deeply saddened by the senseless loss of life. I stopped writing. I prayed, checked on my husband and adult children. In my mind, I began "circling my wagons," not out of fear but as a coping mechanism. I was trying to make sure my immediate world was safe and protected for now. Clearly, a naive response since anyone's world can be changed in an instant by a previously unforeseen event. I am prayerfully thankful for their safety now.

My friend Lauren, coped by packing up her family and animals retreating to their "get away from the city." A place on a quiet river for just the weekend. She desired to get away temporarily from the 24/7 barrage of news, filled with the terror of the events. She wanted to concentrate on the beauty of a crisp fall day on the river with her family. Lauren is thankful.

A Memphis mom flew to Paris to be with her injured daughter in Paris after she was shot. At 23, she was living her dream in Paris. My heart goes out to her and her parents and the terror they are experiencing, but as her dad explained in an interview, "the young woman that was next to her is in a coffin." This statement is jolting in its rawness, but it is the wise perspective of this family's reality. This Memphis family temporarily in Paris is thankful.

Much like 9/11 in the weeks and months to come, stories of the terrorists, victims, and heroes will emerge. My mind knows the world is filled with beauty, light, hope and goodness but after sudden and unforeseen events in our lives and the world, how do we get back to our "new normal?" How do we get back to writing?

For me, I returned to writing on Sunday, November 15, 2015 after seeing "The New Yorker's" cartoon by Benjamin Schwartz. It brought tears to my eyes because it touched a "chord of normalcy." If you are familiar with the children's book set in Paris, Madeline by Ludwig Bemelmans, you will never forget the cadence of his words as he tellsMadeline's story. I've read that story a zillion times to my children when they were littler, and the world was safer. I know the rhythm and words by heart. We even made up our own Memphis version of that story filling it with personal references to our lives. This Parisian story is personal to me and my family. I am thankful for the story by Ludwig Bemelmans.

Cartoonist Schwartz tweaked the words ever so slightly as a reflection of the November 13th events.

"In an old house in Paris that is covered with vines, live twelve little girls whose country still shines."

The familiar rhyme that was "adjusted" and reminds me life goes on after "your world goes crazy." Getting back to a normal routine after a "scary event" is the theme throughout the Madeline  book. 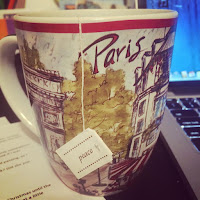 As a writer, your words can have the power to help people cope in times of crisis. I wonder if Ludwig Bemelmans, ever dreamed his words would help the world cope after such disturbing events occurred in his beloved Paris.

Author Melissa Tagg posted this facebook picture and an uplifting status post. I'm thankful for author, Melissa Tagg's letting us use her Paris mug with her Peace teabag photo for this post.

So I ask you on this Thanksgiving Day, when reflecting on thankful blessings in your life, "how do YOU keep writing when disturbing events occur?"