Get Feedback, Publicity, and Pre-Orders with a Contest! 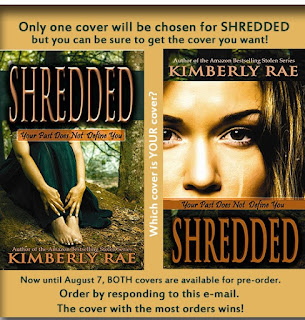 We authors are always looking for ways to get the word out about our books. Marketing opportunities abound for writers willing to spend money, though from what I've heard, most of them do not end up being worth the investment. Social media is free, but requires an investment of time and, like so many other possibilities, the effort can end up costing more than the end result.

So what is an author to do? Most of us are learning through trial and error as the publishing, writing and marketing world continues to change in vast ways. I've tried several that flopped, but I recently tried one that not only provided free exposure and publicity, but resulted in actual sales. Here's how it worked:

My newest novel, Shredded,  recently released, but I could not decide on a cover image. I had posted both covers on Facebook and gotten lots of opinions, some of them very strong in one direction or the other. I've done so before and the results were always strongly in favor of one, making the choice easy. For this book, the results were nearly equal. Some people's opinions were so strong, I was concerned if I chose the opposite cover, they wouldn't want to buy the book.

Fortunately for me, my concerns resulted in a profitable idea. I decided to run a cover contest. Over a
set course of time, readers could pre-order Shredded, choosing whichever of the two covers they liked best. When the time frame was up, the cover with the most orders would be the one chosen as the final cover for Shredded.

It was interesting, when it came down to actual orders, readers were much more in favor of one cover rather than the other. So the contest not only provided pre-orders and a reason for people to share about the book, it also gave me valuable feedback on what my actual readers liked better (rather than just random people commenting on Facebook). 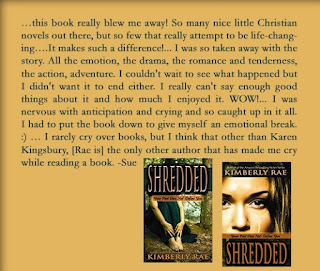 To do the contest, I created images on Photoshop that I used in my Mailchimp newsletter and on Facebook. One image showed the two covers and explained the contest.

Other images shared endorsements by pre-readers or reminded people how many days were left in the contest. I also included a giveaway within the contest as extra motivation.

All in all, the contest proved a great way to share about the new book and get readers excited about it. They got to order the cover they wanted, felt they had a say in choosing the cover (which they did!), and I think didn't feel as you're-trying-to-sell-me-a-book as they might have with many other marketing methods.

You might want to give it a try. Perhaps a contest will prove as useful and positive a tool for you as it did for me!

Award-winning author of 20 books, Kimberly Rae lived in Bangladesh, Kosovo, Uganda and Indonesia before Addison's disease brought her permanently back to the US. She now writes from her home at the base of the Blue Ridge Mountains, where she lives with her husband and two young children. With her trilogy on human trafficking, Rae has become a sought-after speaker and trainer on the topic. Recognizing the lack of books about slavery and trafficking that focus on those who are making a difference rather than glorifying the evil or being overly graphic or despairing, she has also since created a series on modern day slavery for teens and pre-teens (Capturing Jasmina, Buying Samir, and Seeking Mother), and is currently working on a project for adults to help train children to recognize and avoid childhood sexual abuse (I AM SAFE), a major risk factor in childhood and adult exploitation. Since Addison's disease brought her permanently back to the US, Kimberly's created a series on living joyfully despite chronic health problems. Though Rae could find deep, heavy books on chronic illness, she wanted a book that was funny and encouraging. When she could not find one, one night when she couldn't sleep from her medication, she started writing one! "I want my Sick & Tired series to give empathy, encouragement, and a little practical help," says Rae.Find out more at www.kimberlyrae.com