Are You An Outliner? 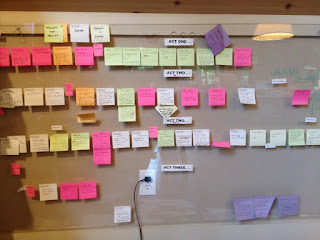 I’m an Outliner. I prefer to know where my story is going before I write. Most writers are a combination of ‘Pantser’ and ‘Outliner.’ Neither, alone, is wrong.

I went to Home Depot and bought an 8 foot wide X 4 foot high acrylic board. I glued ACT ONE, ACT TWO, and ACT THREE in the middle, leaving room for Post-it notes. I also glued several arc points on the board approximately where they should fall in the story. For example, Opening Set Piece, Altered World, No Turning Back, Major Setback, All Is Lost … most all of the key points to hit at the right time. The board hangs on the wall in front of my writing table. Each Post-it note represents a scene.

The problem with it? I had to walk over to the board every time a question popped in my mind concerning the sequence of scenes. What a pain.

Recently, I searched for easy to use computer software programs for my computer. I tried a few and settled on Scapple, shown below. (I realize you can’t read the words, but that’s not the point. The point is how easy it is to use.)

For ‘Outliners’ Scapple is ultra simple. Getting the hang of it took about 30 minutes. I can go anywhere on the Scapple board, click once, and a small writing box appears. The box can take as much copy as you want to insert. It expands automatically. I can even change the width of the box. 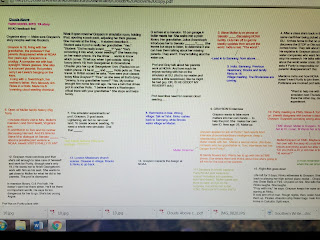 I use these boxes as scene descriptions. I still follow the tried-and-true formula for storytelling— those key arcs necessary for writing a mystery, a suspense, a thriller, whatever.

Michael Thompson was a successful ad agency owner and he and his company won numerous national and international awards. After selling his firm in 2011, Michael began writing, but what started out as a hobby, turned into a full fledge author, writing two graphic novels on the life of David from the Old Testament–DAVID–The Illustrated Novel. Volume 2-won first place Best Graphic Novel and Best Interior Design, 2012, from USA Book’s INTERNATIONAL BOOK AWARDS. Volume 1 won 2nd Best Graphic Novel of 2011 from the Independent Publisher Book Awards. His next project was a sci-fi thriller (JALA) that was serialized in a monthly magazine for an entire year. His novel The Parchman Preacher is available and he has finished the next book, The Parchman Redeemer. Michael writes Christian novels that entertain, intrigue, and shine a light on his Jesus. He’s a member of the ACFW, Mystery Writers of America, The International Crime Writers Association, and the Southern Writers Association. Visit his website, www.michaelthompsonauthor.com  to learn more about Michael.