Everyone knows that if you had a genie in a lamp, he would grant you three wishes.  A fair question would be, Why is it always three wishes?  The correct answer is, Because the number three is magic.

We all grew up on fairy tales and fables that reinforced the number three repeatedly: Goldilocks encountered three bowls of porridge, three chairs, three beds, and, ultimately, three bears. Jack climbed the beanstalk and collected three golden objects. Cinderella had a fairy godmother who evidently attended the same school as the genie, granting three wishes.

The Three Little Pigs matched wits with a big bad wolf who also knew the power of three, declaring that he would do three things: "I'll huff, and I'll puff, and I'll blow your house in."  He didn't include "and by the way, I'm gonna eat you," because that would have thrown off the rhythmic flow and was probably a given anyway.

No less than Solomon himself offered the phrase. "Eat, drink and be merry." The Declaration of Independence grants us the right to "Life, liberty, and the pursuit of happiness" here in the land of the Red, White and Blue. And isn't there romantic poetry in the pledge to "love, honor and obey"? 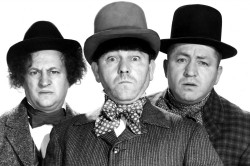 Having grown up with an inherent affinity for trilogies, the audience finds reassurance in stories and quotations that deliver the goods in threes.  It took three ghosts to show Ebenezer Scrooge the error if his ways via visions of his past, present and future. Dorothy met up with three companions on her road trip to Oz, seeking a brain, a heart, and courage. The Three Stooges were a virtual three ring circus unto themselves.

The very storytelling structure of beginning, middle and end owes a debt to the rule of three, although it seems fairly impossible to have a middle without having a beginning and an end, when you stop and think about it. Nonetheless, we consciously build stories with the basic formula of 1) setting it up, 2) telling the story, and 3) wrapping it up.

There are, of course, other numbers that made their mark in literature and lingo, like the seven dwarfs or the Twelve Days of Christmas.  One could bring up the nineteen rings in Lord of the Rings, but technically the elves were allotted three, so there ya go.

In any event, my observations today are merely a celebration of the number three.  Use its power however you see fit, inspired by its ability to add a little extra magic to the story you put your blood, sweat and tears into.

Speaking of stories: A cowboy, an astronaut, and a politician go into a bar...