When an Author Dies 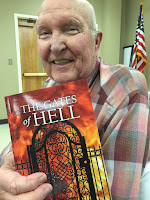 Last week we at Southern Writers Magazine lost a dear friend and author, Earl C. David. He was a biblical scholar and the author of over six books. His third book, "The Gate Crusher" in his "The Gates of Hell" series was finished approximately one week before his death. We grieve for the loss of our dear friend.

This personal loss began my thinking about Earl's plan for his author estate and legacy. As authors we often tend to avoid any discussion of the inevitably of our own deaths. What will happen to our created "babies," our books, our stories and our characters?

Spy thriller author Tom Clancy died from heart failure on October 1, 2013, at the age of 66 with an estate valued at over $83 million dollars. Clancy left behind his wife, a young daughter, and four adult children from his first marriage. Attorney Julie Ann Garber, J.D. has written an article titled, "WRITER TOM CLANCY’S WILL DEMONSTRATES CLEAR AND PRESENT DANGER OF ESTATE PLANNING FOR A BLENDEDFAMILY." This article shows the complexity of issues that have risen after Clancy's death. Clancy heirs have continued to employ authors to write books using characters created by Clancy.

Susan Spann a publishing attorney and author has several blog posts on suggestions for authors as they plan their estate. In one blog post titled, “Who Will You Trust -Wills in Author Estate Planning," she cautions authors. "Authors who have no written estate plan will find their estates (and copyrights) subjected to the laws of the state (or country) where the author resided at the time of death. In most U.S. jurisdictions, the law provides that spouses and biological or legally adopted children inherit the property and rights of a person who dies. However, state laws vary, and in some places property ends up escheating to the state – which means the government could end up with your copyrights."

Jurassic Park seriesauthor and screenwriter, Michael Crichton died in 2008 at the age of 66. His estimated annual earnings at the time of his death were stated to be $100 million per year. Two more Crichton novels were scheduled for posthumous release as part of a $30 million dollar publishing deal.

According to "Open Road Media" Crichton "graduated summa cum laude and earned his MD from Harvard Medical School in 1969. His first novel, Odds On (1966), was written under the pseudonym John Lange and was followed by seven more Lange novels. He also wrote as Michael Douglas and Jeffery Hudson. His novel A Case of Need won the Edgar Award in 1969. Popular throughout the world, he has sold more than 200 million books. His novels have been translated into thirty-eight languages, and thirteen have been made into films." The most recent Jurassic Park movie has been retold and revamped with a 2015 spin on the original story. It makes me wonder how Crichton's estate protected his work written under his pseudonyms.

My point is you never know as an author when you are going to die. When you die how are your books, stories, and works in progress to be used and potentially taxed? Who will own your copyrights? However, you can plan for your "babies" as you would any other asset in your estate and make sure they are included in your will and or trust.

In no way is this blog post and links to be perceived as legal advice. Rather it is just to remind you to have a conversation with your estate planner so your wishes are known with regards to your copyrights for your heirs’ protection and preservation of your legacy.