We talk a lot about giving our characters goals, and then putting obstacles in their path so they have a hard time achieving them.  We can double that drama by making their obstacle something that not only impedes their progress, but something over which they already possess a deep-seated fear. 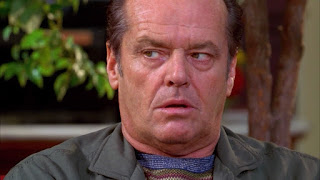 Consider Jack Nicholson's character in As Good As It Gets.  His obsesssive-compulsive disorder is constantly put to the test for him to even have a shot at getting the girl.  The internal roadblock provides a means for conflict at every turn.

Phobias in fiction are worth their weight in gold.  Indiana Jones had a problem with snakes, and part of the fun of Raiders was seeing how he reacted to a roomful of asps.

We identify with a hero who has hangups, since we tend to have a few ourselves.  A warrior without worries is unrelatable.  It would be hard to identify with Superman if his invincible body didn't have a soft spot for Lois Lane.

Reality TV sure knows the value of exploiting contestants' fears.  From Fear Factor (eating bugs) to Bear Gryllis' Running Wild (rock climbing and eating bugs), we're facing our own fears alongside the players, wondering how far we would be willing to go if $5000 was dangled in front of us.  Similarly, we are drawn into a story in which the protagonist is challenged on a deeply personal level.  The specific quest may not be one we ever have to face, but then again, something inside us does like to feel prepared.

Fears we can all relate to include:

The biggest fear of all, of course, is death.  Physical danger of any kind is an intrinsic phobia everyone knows. But even something as simple as disappointment can be a worthwhile challenge to our hero, giving us a very wide berth within which to endanger their destiny.

"We have met the enemy and he is us," Pogo once said.  We can up the ante of antagonism by giving our protagonist a good internal struggle on top of their outside enemies and obstacles.

Inner demons add an easy and especially effective layer of conflict, since our internal fears are among the hardest to conquer.  Don't be afraid to use them.