Is There a Story Here? At a party this weekend I enjoyed having a conversation with a fellow who has been a postal carrier for thirty years.  At one point in my childhood I had wanted to be a mailman, so I had a fair share of questions that he likewise seemed to enjoy answering.  But the most interesting thing he had to say wasn't related to delivering Amazon packages or avoiding getting bit by dogs.

Years ago when his daughter was very young, he would bring her to the post office on Take Your Daughter to Work Day.  She helped him sort the mail for his route in the appropriate slots, and on one occasion she drew him a picture, which he proudly hung in his cubicle.  That drawing has remained in the same place for years.

His daughter is in her late twenties now, so that picture holds special memories for him.  As you can imagine, he wasn't happy when a supervisor told him recently that he had to take it down.  "No personal items in the workspace," they said.  He knew the fact that it had been already hanging there for decades would not be enough of an argument.  Instead he replied, "Then that coffee cup on your desk and those pictures of your family need to go too."  That ended the conversation and, as I understand it, the drawing remains undisturbed.

As he related this to me, I couldn't help but consider the fact that this little episode from his life told me a great deal about the stranger I'd just met.  In a short time I discovered that 1) he is a family man, 2) he is sentimental, and 3) he can stand up for himself.  If these were traits you wanted to convey in your novel's protagonist, a scenario such as this would be far more memorable than simply describing him as a sentimental family man who isn't afraid of his boss.  We bond with a character when we observe our own humanity in him/her.

By itself, incidents like this aren't stories as much as they are anecdotes.  But stories come in all forms and fashions, and what seems like a simple premise could easily be built upon and turned into a major storyline or at least a worthy plot point.  A man getting shorted on his change at the sub shop is barely an anecdote.  But if it's the last straw in his already unstable life, it could be the basis for a crime novel. 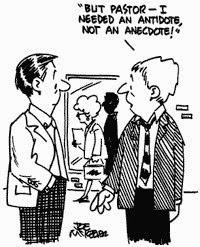 In broadcasting, a news "story" can be little more than a headline, as in: "Pitch Perfect 2 leaves Mad Max: Fury Road in the dust. The musical's opening weekend brought in over $70 million, compared to $44 million for the sci-fi sequel."  Just the facts has its place in the truest definition of story, and we know there's more to the story if we choose to go there.

A classic newspaper credo states that even the most boring story can become fascinating with the right sidenote or quote included.  A good reporter looks for that unique angle to give the story its punch.  Sometimes interviewing the quietest witness yields the biggest revelation.

Whether we hear them from someone else, or live them in our own lives, every day we are witness to countless moments that could be the starting point for the next story or scene we write.  If we learn to be keen observers as well as creative writers, we'll never run out of ideas.