Do You Really Want To Write Like Hemingway Or You? 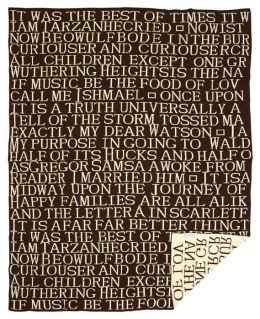 One of the best gifts my husband has given to me is a classics quote throw blanket. There are quotes from Dickens, Brontë, Austen, Burroughs, Homer, and others. This throw features quotes from timeless literature classics. These authors have different techniques to convey their stories. They have remarkable voices, their own voice.

The latest app for writers to consider is the HemingwayApp, an online editing app that promises to make your writing mimic the style of Ernest Hemingway. Southern Writers Magazine and it's blog does not endorse any app but does want to keep its readers alerted to writing tools.

If you're as intrigued as I was, it's easy enough to try. In the app "edit" field, paste a piece of writing you want to have compared to Hemingway's style. A color-coded algorithm, highlights what the developers of the app feel is not the Hemingway style and assigns a numerical grade for readability. An app writing score of a Grade 10 or below is “bold and clear.” Above a Grade 10, the writing is “hard” or “very hard” to read. 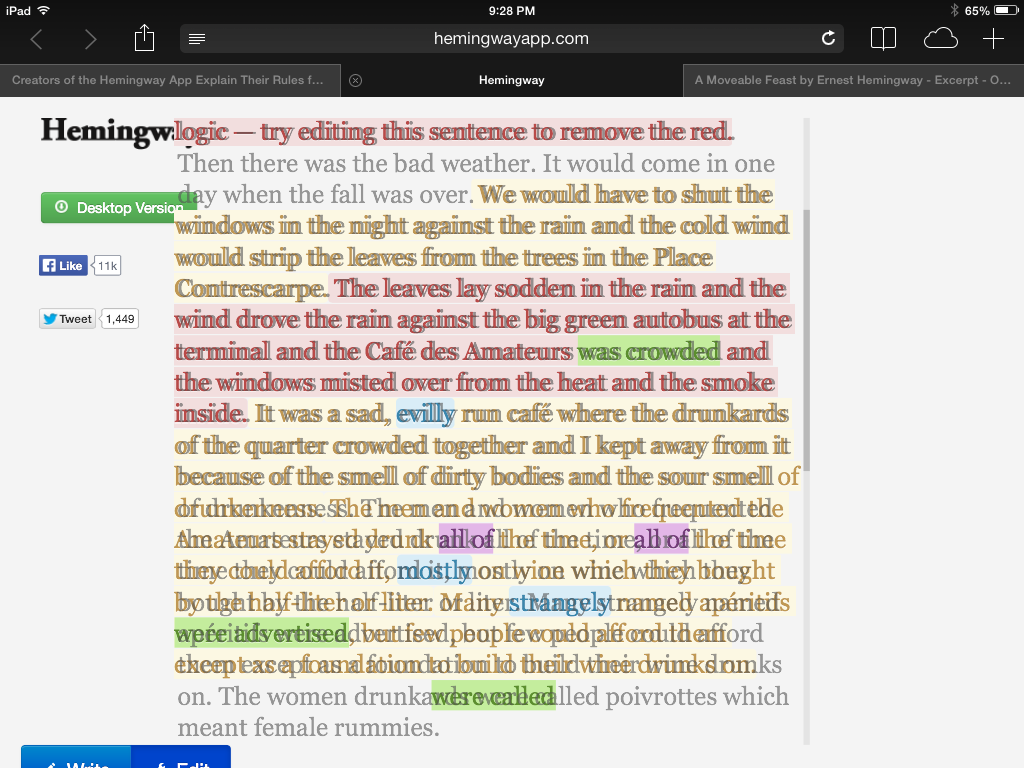 The highlighted "mistakes" break down as follows; Yellow; "shorten the sentence or split it." Red/pink highlights; "your sentence is so dense and complicated that your readers will get lost trying to follow its meandering—try editing this sentence to remove the red." Blue highlights adverbs and are seen as bad, since Hemingway didn't use them. Purple highlights suggest using a simpler word or phrase. Think "Old Man and The Sea." Lastly, green highlights indicate you have lapsed into a passive voice, as judged by the app.

Challenged, I had to try Hemingway himself and see what he scores with the app bearing his name. I chose Ernest Hemingway's, "A Moveable Feast": Chapter One, paragraph one; "Then there was the bad weather. It would come in one day when the fall was over. We would have to shut the windows in the night against the rain and the cold wind would strip the leaves from the trees in the Place Contrescarpe. The leaves lay sodden in the rain and the wind drove the rain against the big green autobus at the terminal and the Café des Amateurs was crowded and the windows misted over from the heat and the smoke inside. It was a sad, evilly run café where the drunkards of the quarter crowded together and I kept away from it because of the smell of dirty bodies and the sour smell of drunkenness. The men and women who frequented the Amateurs stayed drunk all of the time, or all of the time they could afford it, mostly on wine which they bought by the half-liter or liter. Many strangely named apéritifs were advertised, but few people could afford them except as a foundation to build their wine drunks on. The women drunkards were called poivrottes which meant female rummies." 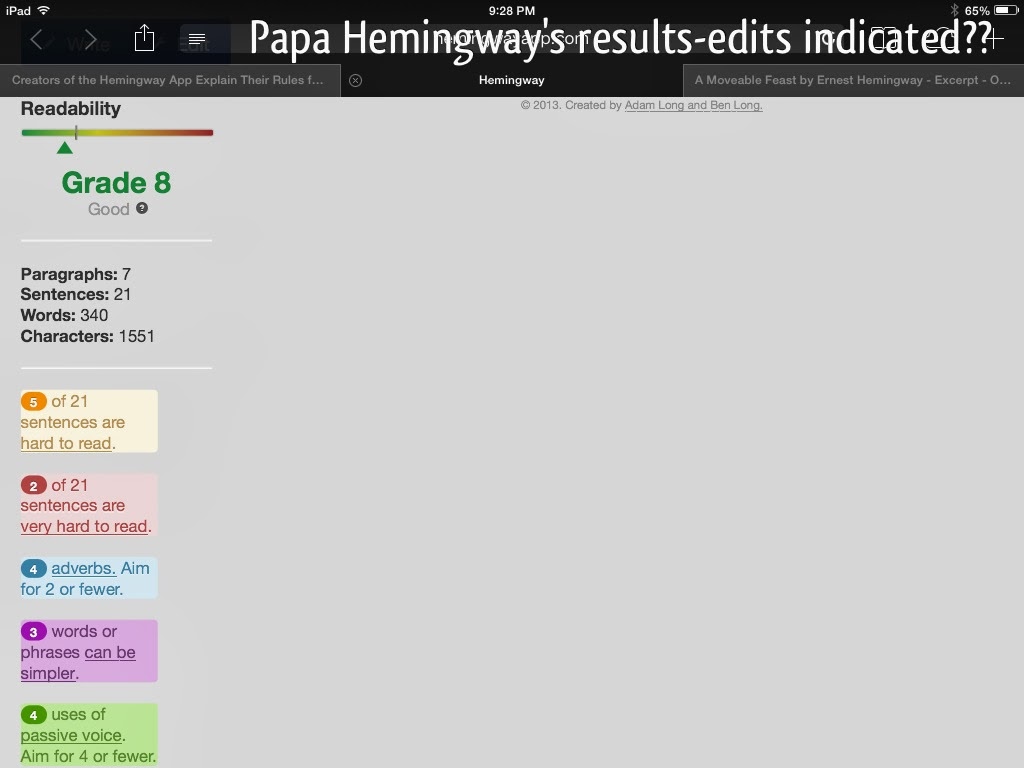 See the picture for the results. Hemingway had some major edits needed according to the HemmingwayApp. For more HemingwayApp results you can read The New Yorker's, February 13, 2014 post by Ian Crouch, titled "HemingwayTakes the Hemingway Test".

The HemingwayApp is helpful for anyone who wants to have a bold and concise prose style. If you chose to play with the app, realize the app is only as good as the programming. Just don't lose your own voice.

Like the classic book quotes on my blanket, those authors are known for their unique voice and style. How boring would the world be if we all wrote like one particular author? To your own writer's voice be true.

Email ThisBlogThis!Share to TwitterShare to FacebookShare to Pinterest
Labels: A Moveable Feast, Annette Cole Mastron, Do You Really Want To Write Like Hemingway Or You?, Ernest Hemingway, HemingwayTakes the Hemingway Test, HemmingwayApp, Ian Crouch, The New Yorker