The Value of a Good Bad Guy 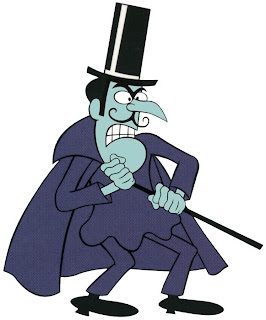 Captain Hook.  Long John Silver.  Hannibal Lecter.  Darth Vader.  The Wicked Witch of the West.  Dracula.  What do these, and countless other villains from literature and movies, have in common?  Yes, they all talk kinda funny.  But more importantly, each one is infinitely more intriguing than the hero of the story.

Nothing against Peter Pan, Luke Skywalker or our little runaway from Kansas, but the truth is, you could rewrite pretty much every one of these classics and put any character in the protagonist's seat, and the antagonist would still steal the show.

A memorable villain can take a tale to epic proportions, even if the hero is an everyday Joe, or a boring do-gooder.  Did anyone ever really cheer for Dudley Do-Right?

Even if you've never read the book or seen the movie, you can probably tell me more about the whale in Moby Dick than you can the hero of that story.  Which would be whom, by the way?  Captain Ahab?  Ishmael?  It hardly matters, because either one is a mere sardine compared to the dramatic power of the great white whale.  Readers had to wade through too much information about the fishing industry when all they really wanted was a good shipwreck.

Despite all his cool transportation and wonderful toys, where would Batman really be without bigger-than-life archenemies to go to bat with?  Superheroes become superheroes by conquering supervillains. It's always disappointing when a bad guy in those stories is just a common street thug.  Even Dick Tracy was given crooks who at least looked weird.


And it was only half in jest that I brought up villains having odd speech patterns. Silence of the Lamb's Hannibal Lecter's intensely calculated articulation contributed greatly to his manner of menace.  One feels he's so high above us on the intelligence scale that he can suck our mind right out of us.  The cackling of a witch or the grunts of a monster define them as creatures from our nightmares.  At the very least, a foreign accent tends to take us out of our own turf and into unfamiliar territory.

Not that every hero pales in comparison to his foes.  Indiana Jones's charisma and humor managed to outshine every nemesis. James Bond steals the screen no matter who's trying to shake and stir him. Name just about any detective or mystery series and the writer has taken care to give that hero or heroine enough personality to carry story after story.  But a memorable villain only makes it better.

The bottom line is, a good bad guy is good to find.  No matter who the star of your story is, give them a villain so unique and bigger than life that when your protagonist conquers them, they will earn the title of hero.