The Importance of Strong Women In Life and In Thriller Books

I’ve always felt very comfortable around women. I like them, I enjoy their company, equally as the company of men. I grew up with two strong-willed and confident older sisters with my resourceful mum ever-near, while enjoying a strong matriarchal figure in our nan and a collection of larger than life Aunties – the collective influence of whom ensured from a young age that I’d have nothing but the greatest respect for the female of our species.

When creating a series of action thrillers, as I am, it’s important to not fall back on the age-old formula of female characters written from a passive view, like that in the old Bond films and to an equal extent, Ian Fleming’s novels. In my espionage stories, the female lead characters are all equal players across the landscape that I create.

I’m not a fan of films or books that still present women as window-dressing. I’m proud to boast an equal division of male / female readers and am confident that it's because there are strong female characters within my novels that women readers can relate to. For me, female leads need to be multi-dimensional: strong but vulnerable, intelligent, practical, and with a relevant, believable and, above all, an interesting story, because that’s the kind of women that I admire most and am surrounded by every day.

My protagonist, Alex Morgan, finds it hard to resist strong and capable women like the beautiful but distant Arena Halls in Defender and more recently, the talented and glamorous Charlotte-Rose Fleming in Hunter. But who can blame him? He’s got good taste.

The female lead in Defender, my first action thriller, is Arena Halls, a highly educated government specialist who works for the British Foreign and Commonwealth Office in the UK. She has some of the attributes of my wife Sar – big blue eyes, short blonde hair, and an innate ability for stubbornness combined with feminine charm – even her name Arena Halls is an anagram of my
Sar’s name!

Then in Hunter, the second in the series, there’s Charlotte Rose Fleming. Charlotte Rose – or Charlie for short – is a world-famous classical pianist: technically proficient and a consummate entertainer. Like Arena, Charlotte is intelligent, resourceful and able to take care of herself even when faced by overwhelming odds. And Charlie’s name is a hat tip to my literary hero Ian Fleming, and the result of a competition to name the heroine in Hunter that I held on Facebook.

One of my favorite female leads in the books I read is Dr Kay Scarpetta, as written by Patricia Cornwell. She’s resilient, intelligent, devoted to family, and an expert in her field, with just enough vulnerability to make her real. I like having examples like Scarpetta to recall when I’m writing a scene – especially when writing a dialogue exchange between characters.

Meanwhile, the Chief of Intrepid, General Davenport’s right hand person, Mila Haddad, is an accomplished criminologist with experience in the International Criminal Court in The Hague. In the Mila character I focused on bringing out the other side of Intrepid which is the detailed analysis and understanding of the crimes they are attacking while in equal measure reflecting the loyalty not just to General Davenport but in a larger sense to the global cause. In fact, it is Mila’s intellect and doggedness that leads Intrepid successfully down a course of enquiry and discovery that they would not have otherwise followed in Hunter in tracking down one of the last fugitive Serbian war criminals.

In Avenger, the book I’m currently penning, I am thrilled to be developing the first female Intrepid field agent and know that her character will be on an equal footing as the male counterparts. I can’t divulge too much, but in a similar vein to agents Alex Morgan, Dave Sutherland, and Hermann Braunschweiger, this new operative is hand-picked for Intrepid and comes from a professional and emotional background commensurate with that of her colleagues. 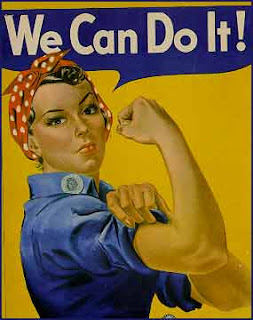 This newest agent, let’s call her E.R., is not going to be acting on orders without another thought. Life is more complex than that. In reality, when deployed to the field, these agents have to live by their wits – they’re not guided every step of the way by an all-seeing master giving them instructions through an ear piece. They are field agents in the truest sense of the words and they are in control of their own destiny and responsible for the decisions they make as they make them, whatever the outcome.

For Morgan and his fellow agents, the life they have chosen is a vocation and throughout the series as it develops, women will continue to play a central role in the stories and will be anything but window dressing in the world of Intrepid. As much as I loved Ian Fleming’s Bond stories and have been endlessly inspired by his writing, that style of representing women in literature is long gone – and strong, talented, multi-dimensional women are here to stay.

Chris Allen is  former Paratrooper who has been extensively involved in Government Security and Counter-Terrorism since leaving the military, Chris Allen's thriller series features Alex Morgan, star agent in Interpol's ultra-secret sub-directorate Intrepid (his literary brainchild). Defender and Hunter quickly became eBook sensations and Avenger is due out end-2013 with a film franchise underway. Visit www.intrepidallen.com, or say g’day to Chris at www.facebook.com/intrepidallenor on Twitter @intrepidallen. Chris also blogs at www.intrepidallen.com/blog.