Getting Past our Writing What-Ifs

A couple months ago, I wrote a blogpost entitled Who Cares What’s Hot for my friend and fellow blogger, Julie Cave.  It was chock-full of the swagger and confidence that comes from being a newly-agented author.

We’re two months into the submission process on my Viking novel, and the swagger has swagged on outta here.

I chose to write about a historical time period I’m particularly fond of, since I’m supposedly related to Eirik the Red. The story of my main character, Gudrid, shows up in the Icelandic sagas, and I felt strongly that someone needed to write about this woman. 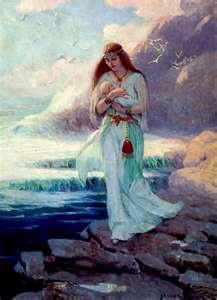 She came with her third husband (the other two died) to the “new world” of North America. She had the first European child born on this soil (his name was Snorri, not Virginia Dare). She grew up steeped in paganism, but rejected tradition and became a Christian. Icing on the cake: she was a ward of Eirik the Red.

A story worth telling, no?

I enjoyed bringing Gudrid to life, writing in the first-person, present tense to make it more immediate. She’s a realistic, believable character, not some weird Viking from Hagar the Horrible. She struggles with temptation in her marriage. She fights slavery. She has to survive while caring for a baby.

I’ve received mixed responses from publishers, but one that was particularly discouraging indicated that though the writing is sound, people won’t want to read about Vikings because they don’t know much about Vikings.

What? I thought the purpose of reading books was to open new worlds to us. I know many people knew nothing about the nature of black “help” in the South until The Help arrived on the scene. People knew little about Johannes Vermeer until Girl with a Pearl Earring came along. And The Mists of Avalon has single-handedly colored the way we look at King Arthur and Guineviere.

Fiction can change the way we view an entire time period, for good or for bad. I believe there’s enough evolutionary (Clan of the Cave-Bear), pro-pagan hype out there. I felt it was time time to show how Christianity changed an entire group of people for the better.

I’m nothing, if not passionate about this book.

But what if no one wants to publish it (my husband assures me this will not happen, and he hasn’t read the book…bless his heart). What if these years of research/revising/checking the Old Norse dictionary for word choices are worthless in the end?

What if Gudrid’s story is never told?

I’m trying to have faith. Trying to leave this in God’s hands. But, at the end of the day, God will choose to prosper this book or not. I did it for His glory. I was born to write, simple as that. Every time I try to stop writing, God sends me numerous messages that I’d better stick with it.

****How about you? Where are you in this writing process? What are your What ifs? And how do you feel about reading about new historical time periods?****

Heather Day Gilbert enjoys writing stories about authentic, believable marriages. Fifteen years of marriage to her sweet Yankee husband have given her some perspective, as well as eight years spent homeschooling her three children. Her historical fiction novel, God’s Daughter, is rooted in the Icelandic sagas. It tells the story of Gudrid Thorbjarnardottir, the first European woman to have a baby on North American soil. You can find out more at Heather’s blogspot, or at her FB page. She’d also love to chat on twitter @vikingwritergal.