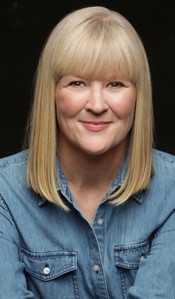 WV STITCHER said of Suzanne Woods Fisher, “Fisher writes her characters like they are old friends, making me connect with them, hoping that their lives will work out for the best, and when I come to the end of a story, I find myself missing them, and hoping to see them again in another story.”

Suzanne Woods Fisher is an award-winning, bestselling author of more than 40 books, including The Sweet Life, The Moonlight School, and A Season on the Wind, as well as the Three Sisters Island, Nantucket Legacy, Amish Beginnings, The Bishop's Family, The Deacon's Family, and The Inn at Eagle Hill series. She is also the author of several nonfiction books about the Amish, including Amish Peace and Amish Proverbs. She lives in California.
The first book she wrote for Revell was non-fiction, Amish Peace for a Complicated World. It became a foundational book for her to write credibly about the Old Order Amish, to look beyond the bonnets, buggies and beards. That book became a ECPA Book of the Year finalist.
Her book, A Season on the Wind, released in October of 2021. With this book she welcomes her readers to the Amish community at Stoney Ridge in this engaging story of discovering just who the rare birds are in life. 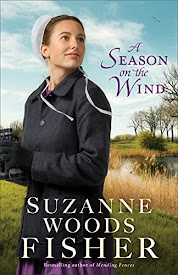 Ben Zook had only two loves in his life: books and birds. In a stroke of good fortune, he'd stumbled onto a way to cobble together those two loves into a career, writing books about rare birds. He was as free as a bird--until a chase for a rare White-winged Tern takes him to the one place on earth he planned to never return: his Amish home in Stoney Ridge.

Desperate for photographs of the elusive tern, Ben hires a local field guide, Micah Weaver, and boards at Micah's farm, planning to "bag the bird" and leave Stoney Ridge before anyone recognizes him. But he neglected to plan for Micah's sister, Penny.

One long-ago summer, Penny had introduced Ben to birding, even sharing with him a hidden eagle aerie. That was when she knew true love. She'd always hoped he would come back to Stoney Ridge. Back to his Amish roots. Back to her. The only problem? Ben has absolutely no memory of Penny.
Here are a few of the praises she has received:
“Fisher has taken her research to the next level and brings to life the forgotten beginning of Quakers on Nantucket Island.” RT 4 1/2 STAR TOP PICK


“It’s so well written, and even though it’s labeled as a romance, it’s probably one of the most “real” fiction books that I’ve read.” RENEE, BLACK ‘N GOLD GIRL’S BOOK SPOT ON THE LESSON


“Fisher’s superb command of her historical setting is particularly commendable as she launches her Nantucket Legacy series.” BOOKLIST


“Fisher’s writing brings that Amish sense of peace into your own world. The Choice brings an entirely new perspective to the Amish way of life. You will love it!” KRISTIN BILLERBECK ON THE CHOICE 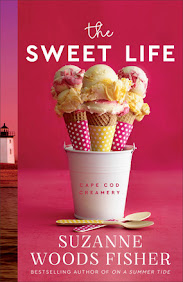 In May of 2022, Fisher's new book, The Sweet Life, Book #1 of her new series, Cape Cod Creamery releases. She welcomes her readers to a summer of sweet surprises on Cape Cod--a place where dreams just might come true.
You won't want to miss this exciting new story!
Learn more at www.suzannewoodsfisher.com and follow Suzanne on  Facebook@SuzanneWoodsFisherAuthor and Twitter @suzannewfisher
Photo Credit: © Dan Davis Photography

Email ThisBlogThis!Share to TwitterShare to FacebookShare to Pinterest
Labels: A Season On The Wind, I love to Write, Suite T, Suzanne Woods Fisher