The Alphabet Ends With Y 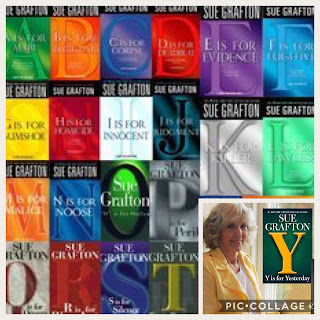 I learned last week, a favorite author, Sue Grafton had died December 28, 2017. I had come to know her as a business friend, in recent years, but was an avid reader of her books since A is for Alibi. She was generous, kind, and encouraging to me and other authors around the globe. Her loyal friends and fans were stunned and saddened.

Sue is known best for her alphabet mystery book series, with her memorable protagonist, Private Investigator, Kinsey Millhone. As her fans know, Kinsey lives and works in 1970’s California. It was an era before cell phones and computers, where leg work meant actually doing physical investigation, not surfing the Internet for answers. On August 22, 2013, I wrote a blog post that highlighted planning your series protagonist titled, Think Ahead as your Character Develops. In this blog I referred to Sue Grafton’s purposeful plans for her series protagonist, Kinsey.

She shared this experience just just 9 days before her death. It's like a little written nugget for her many friends and fans. Like so many readers of her post commented, we had hopes she would weave the story of “The Traveling Trunk,” into a Christmas tale as only Sue Grafton could do. I loved that she signed the post as her protagonist, Kinsey signed her PI written reports to clients when closing a case. You can see her pictures of the trunk and it’s contents on her Facebook page.

Several years ago, Sue wrote the book, Kinsey and Me. A reader who rated Sue’s book on Goodreads said, “Kinsey and Me: Stories is a rare treat for a mystery fan and for students of the writer's craft. The Kinsey short stories show exactly why Grafton has such a loyal following. They are fun and well crafted with surprisingly complexity for their given space. The ...and Me stories - more vignettes, really - are what push this collection into something special. They are raw and heartbreaking and beautiful; I applaud Grafton's courage and willingness to share them. To the fan, though, they are also a trove of unexpected insights into the character and world of Kinsey Millhone. It really is unusual to get to see so clearly how a fiction series is informed by the interior landscape of an author.” 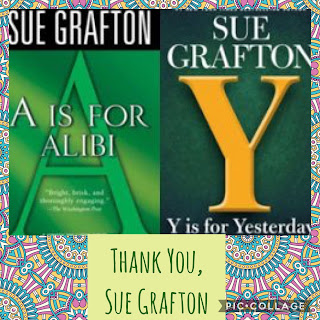 Her daughter, Jamie turned to social media to share the family’s thoughts following her Mom’s death, “Hello Dear Readers.  This is Sue's daughter, Jamie.  I am sorry to tell you all that Sue passed away last night after a two year battle with cancer. She was surrounded by family, including her devoted and adoring husband Steve. Although we knew this was coming, it was unexpected and fast. She had been fine up until just a few days ago, and then things moved quickly. Sue always said that she would continue writing as long as she had the juice. Many of you also know that she was adamant that her books would never be turned into movies or TV shows, and in that same vein, she would never allow a ghost writer to write in her name. Because of all of those things, and out of the deep abiding love and respect for our dear sweet Sue, as far as we in the family are concerned, the alphabet now ends at Y.”

Thank you, Sue Grafton for many enjoyable hours of reading and your friendship. You will be missed and for me, too “the alphabet now ends at Y.”

Email ThisBlogThis!Share to TwitterShare to FacebookShare to Pinterest
Labels: A is for Alibi, Annette Cole Mastron, Communications Director for Southern Writers Magazine, Kinsey and Me, Kinsey Millhone, The Alphabet Ends With Y, THE RAT BEGAN TO GNAW THE ROPE