In a recent interview, John Grisham gives a glimpse into how his hobby inspired his 30th book, Camino Island.

It's been 25 years since Grisham has done a book tour and current technology has allowed everyone to share in the experience via a podcast titled Book Tour with John Grisham. Available at iTunes and Google Play.

Watching the podcast of Grisham may give you ideas for promoting your own book/books. It could even provide you with inspiration for your own book tour.

I'm a fan of John Grisham. We were both born in the same town and both raised and worked in a bigger river town. His books have the ability to stay with me, and his plot lines flit through my mind from time to time. He is a collector of books, as am I. Albeit, his book collection is classic first editions, and mine are not. Sigh. I'm now collecting signed Grisham first editions, wishing I had started sooner.

The plot line of Grisham's new book finds inspiration in his own hobby of collecting first editions. As Grisham says in his interview, "I collect first editions. I have a number of Faulkners, Steinbecks, and Hemingways. Fitzgerald only had five (novel) manuscripts but a ton of short stories, which he was better known for when he was alive. After his death, Gatsby became his big masterpiece and his best-known work. But Faulkner had forty books, forty manuscripts. They are all stored in one place, at the library at the University of Virginia. I’ve seen them; they’re very well taken care of. But there are forty of them; they would be kind of hard to steal. Hemingway’s stuff is scattered, as is Steinbeck’s. And that left Fitzgerald. As I learned when I was doing the initial research, all five manuscripts are in one place, at the Firestone Library at Princeton. If you’re going to steal stuff that’s truly priceless, that’s a good place to start."

I love that Grisham has written a book about rare book collections and picked F. Scott Fitzgerald books as the focus. "Grisham tells CBS This Morning, a list of writing tips: 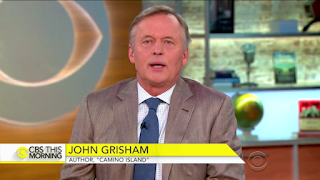 Grisham also weighed in on plotting in the CBS interview. He talked about writing and says the idea that an author will create a great character and that character will then take over the action is 'total B.S.' Plotting takes work. You have to carefully plot and outline your story before you start. Especially if you are writing mysteries, or suspense or thrillers where the plots can be very intricate. It takes a lot of work. I spend a lot of time outlining before I write the first word. Prologues are 'gimmicks to suck you in.'"

What hobbies do you have that could provide a inspiration for your next book?