Yesterday I woke up to the sound of my house phone ringing at 5:30 a.m.  I didn't recognize the area code on the caller ID, but at that hour was too groggy to question whether it was someone ignoring the Do Not Call list, so I answered it. 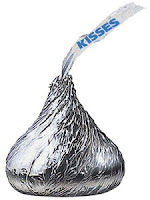 The man on the line sounded too hesitant to be a telemarketer, and when he asked for me by name I confirmed that I was he.  I prepared myself for bad news about a friend or a distant family member.  However, he went on to tell me he was from Pennsylvania and had found my wallet that I'd lost on a vacation in Hershey over a decade ago.  He found it way back at that time but never turned it in, and instead spent the $500 worth of traveler's checks and cash that were in my wallet.

In recent years, this fellow became so wracked with guilt, he explained, that he replaced the money and vowed to track me down and return it with his apologies.  He offered to either mail it to me or, because he will actually be in my city next month, deliver it in person and treat me to lunch at the restaurant of my choice.  I told him I would indeed like to meet him and shake his hand for his honesty, but lunch wouldn't be necessary.

I'll stop right here because I want to confess that the majority of this story in totally made up.  You may ask where the truth ends and the fallacy begins.  Actually, it's right after "Yesterday I woke up".  No early morning phone call, no lost wallet, and anyone who knows me knows I'd never turn down a free lunch.

Forgive me for taking you on that little ride, but those 229 words were more interesting that what really happened yesterday morning, which involved little more than a bowl of Special K.  My goal was not to mislead but to illustrate that from the moment we wake up there is potential for endless stories, springboarding from the inconsequential moments that occur throughout the day right up to the time we hit the hay.

Countless authors find their inspiration from such things as the daily headlines.  From local crimes to human interest stories, the random mention of someone else's experience is prime fodder to be embellished or reimagined into a sensational story.

As an example, in the above scenario, lunch with this stranger could develop into a friendship that changes lives, or it could be part of a devious plot that turns into a horrible nightmare. Depending on the mood and the intent of the writer, the simplest story can take any fascinating direction.

I'm often reminded of a conversation I once had with author Frank Tuttle.  Although he writes both novels and short stories, he has a special fondness for the short story form because once he sits down with an idea he allows it to take him wherever it chooses to.  Capturing these tales of the unexpected off the cuff with no outline, the short stories he writes can be as surprising and entertaining to him as they are to his readers. I encourage you to train your writer's brain to be more alert throughout each day for those overlooked moments that could be the nucleus of a great story.  And when you find one, be sure to enter it in Southern Writers' Fifth Annual Short Story contest, which is going on right now.  You'll find complete details at: http://www.southernwritersmagazine.com/shorts.html