Chart It!—How to Keep Track of Your Characters

What color were her eyes again? How long has he had this job? When did she break her arm, and is she out of her cast yet?

When we’re writing a novel, details threaten to swamp us. We waste time tracking them down. We waste time fixing them during editing. And when we mess up, we drive our copyeditors—or our readers!—crazy.

A character chart can save time and headaches. I use a simple table in Microsoft Word, but you can use any form you like. I prefer to enter information as I go to keep it up-to-date. When I turn in my manuscript, I include my character chart—the editorial staff at my publishing house loves this!

Here’s a snippet of the chart from my most recent World War II novel, In Perfect Time, showing the main characters, Kay Jobson and Roger Cooper.

Characters: Each named character gets a row in the table. I group characters by story function, such as “Kay’s family,” “802nd Medical Air Evacuation Transport Squadron” (Kay’s unit), “64th Troop Carrier Group” (Roger’s unit), and of course, “other.”

Name: The first column is for names. I can check my table for repetitions, too many names that start with M, and ethnic diversity. Since I use military settings, I include the character’s rank. Also include nicknames, including familial nicknames—do her children call her “Mom” or “Mama”? I also add “nonfictional” to any real historical figures mentioned in the story.

Role: In this column, I state the character’s role in the story—“Kay’s father,” “Roger’s best friend,” and their job. To keep the timeline straight, I often include graduation dates and when the character started or changed jobs.

Family: List the character’s family—birth order, names of parents, siblings, spouse, and children. Since my novels feature characters from all over America, I list hometown or region.

Age/Birthday: Self-explanatory! But it’s important to know how old your characters are, especially if the book or series spans a longer period of time, or for child characters who change rapidly. For minor characters, this might be only “middle-aged” or “early twenties.”

Description: For major characters, I list height and weight, hair and eye color, and other significant features, including scars or disabilities. For minor characters, I only list what’s mentioned in the story. 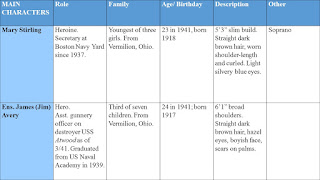 Other: List any detail you need to track. Do they wear glasses or speak Mandarin or smoke? I listed singing voice, because it’s pertinent to my story. With my military setting, I include promotion dates. I include dates and nature of injuries (I’m mean to my characters!), so I can track their convalescence and make sure the cast doesn’t move from one arm to the other. I also include the date a character is killed (I told you I’m mean).

A Stitch in Time . . .With a bit of work in advance, you can create a tool to save loads of time later. And your editor—and readers!—will love you.

Sarah Sundin is the author of seven historical novels. Her book, Through Waters Deep, releases this month and is Book 1 in the Waves of Freedom series. Her other books include In Perfect Time (Revell, August 2014). Her novel On Distant Shores was a double finalist for the 2014 Golden Scroll Awards. A mother of three, Sarah lives in northern California, works on-call as a hospital pharmacist, and teaches Sunday school. She also enjoys speaking for church, community, or writers’ groups.
Website: http://www.sarahsundin.com Blog: http://www.sarahsundin.com/blog
Facebook: http://www.facebook.com/SarahSundinAuthor
Twitter: http://twitter.com/sarahsundin  Pinterest: http://pinterest.com/sarahsundin