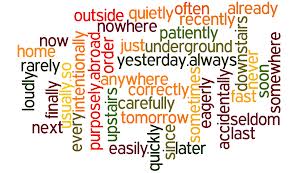 A few days into the 2013 year, I finally came up with a New Year’s Resolution that wasn’t about weight or exercise or procrastination. This year I’m going to live my life as an adverb. Yes, an adverb, that archaic part of speech, once delightfully abundant, yet so out of favor in modern writing. Allowing an adverb to creep into a sentence at just the perfect time is like fitting the last piece of a jigsaw puzzle, raising the adjective to a new level, heightening the verb’s action. Live fully. Casually. Cheerfully. An adverb a day keeps life on the move.

I’d like to claim this thought as my own, but it actually came from a call-in visitor on NPR’s Diane Rehm Show when that day’s guest, Jeremy Dean, presented his take on the psychology of New Year’s Resolutions. One caller said that at the beginning of the month she brings out her trusty calendar and in each day’s block, writes an adverb. That carefully chosen word propels her as she winds her way from morning to night. She lives her life as an adverb. 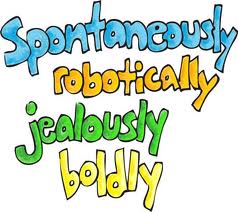 What a concept! Imagine the world if in the morning everyone chose an uplifting adverb to define each action ahead, even if the day goes hysterically. No, it’s not looking back to give a handle on the actions that happened. It’s consciously planning ahead, so that the adverb of the day is in the subconscious, a page from a guidebook, a way to live out a life.

Gretchen Griffith is a former teacher whose career covered multiple levels from Head Start to college freshman. She has been active in the preservation of local history through several projects, resulting in a narrative nonfiction, Lessons Learned: The Story of Pilot Mountain School, released in 2012. Her next book releases July 7, 2013, self-published through CreateSpace: Called to the Mountains: The Story of Jean L. Frese, a memoir of her mother's cousin's life experience at the Salvation Army Mountain Mission in western NC. Her children's book, When Christmas Feels Like Home releases in September 2013. She currently serves as the  volunteer coordinator for students who go abroad with AFS, a cultural exchange program. She has published in Highlights for Children and in professional curriculum guides.
www.gretchengriffith.com and www.gretchengriffith.blogspot.com
twitter: @gretchengriffth
Facebook: https://www.facebook.com/gretchen.griffith.50?v=feed
LinkedIn https://www.linkedin.com/pub/gretchen-griffith/9/44/773?_mSplash=1