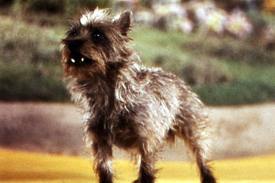 I would say that writing the book Toto's Tale with my daughter Meg was a dream come true, but in fact I didn’t realize how unlikely it was until it had already happened. Timing was crucial. If we’d started when she was too young, her vocabulary skills might have been too elementary to fit with mine. If we’d waited any longer, there would have been no time for us to finish. We started at just the right time.

But that was entirely by accident.

Neither of us remembers whose idea it was to explore the story of the Wizard of Oz from Toto’s point of view. We started working on it as something to keep us busy during her brother’s basketball practices.  I brought the book and a pad of paper with us and we went through the tale page by page, deciding how Toto would see (or more importantly smell) things. We decided, for instance, that Toto would look forward to going into the cellar during storms because the smells underground were so much more interesting. I described it as a rich earthy smell. Meg said it reminded him of underwear. Her description was far more memorable!

She was probably in second or third grade when we started, and by the time we finished the edits, she had reached the end of sixth grade. Today she’s in high school and has a schedule packed with activities including Girl Scouts, 5-6 days a week of jump rope practices and performances, cello lessons, church youth group, and the ever-present homework. It’s nearly impossible to write a blog together, let alone an entire book.

Even back in days when she had so much more free time, Meg remembers not wanting to work on the book.  Our progress was casual for the first few years, and then I decided we really should finish the book. So it became work. By that point, our storyline had branched away from the plot of either the book or the movie, so we were no longer reinterpreting a tale; we were creating a new one. We’d sit down together and while I was typing in something, she would slowly start to scoot backwards out of the room, hoping to make a getaway. I’d set a time limit and coax her to stay. She is a much more creative thinker than I am and I really wanted to harness some of that free energy. But I guess wild thinkers, just like wild ponies don’t like to be harnessed!

Meg is much more visual than I am, and as time went on, she spent more time drawing pictures for the book than working on the words of the story. Many times we’d discuss what we thought should happen and I’d sketch out the action, but leave the description open for her to fill in. As she remembers, “I liked drawing more than writing, and still do. I would always draw covers for our book. Mom said I might be able to draw the real cover for our book so I got it in my head that I would, and when I found out that an illustrator had drawn the cover, I was sad.”

She had the most fun creating the creatures who worked in the witch’s castle, the “lickloes.” They have the body of a cheetah, but they are peacock blue with peacock green tiger stripes, human hands, a giraffe's neck, a lion's mane (but with the same stripes as the body), and a penguin's head.
She’s very adamant about the colors, even though we couldn’t use them in the story because dogs don’t focus on color the way humans do. Instead of color, we tried to paint word pictures with scents. The inhabitants of the Emerald City are described in the book as green. Meg said that to Toto, they smelled like plants. I never would have thought of that myself.

Our favorite character in the story is one of the witch’s wolves. Meg says, “I named him ‘Happy’ after one of my mom’s stuffed animals that I now have. He reminds me of Shaggy from Scooby Doo, which is my favorite TV show.”  Again, neither of us can remember who created Happy, but we both love him. One of the themes of the story is miscommunication, and Meg was the one who realized that Toto would be able to understand the wolves better than he understands Dorothy and the others who speak human language.  Because he can communicate better with the wolves better than with his "pet girl," he develops a friendship with Happy, and friendship is another key theme of the story.

One of the interesting parts of the process was going through the line edits, because our editor scheduled sessions to work together online in real time. We scheduled many of these sessions for after school hours so Meg could participate. Three of us would be typing comments on separate computers all at the same time – as the editor suggested a change, we’d discuss it on screen and sometimes yelling to each other from room to room at the same time. I really appreciated the fact that the editor made the effort to include Meg in the process, and she saw the benefit. There were times when we’d debate which word to use and Meg would type in “what does that mean?” So right there we knew that option wouldn’t work.

Overall, the whole experience was a true blessing. We got the chance to spend time working together in a variety of ways, some pure fun, and some productive. Collaborating made the story so much stronger than it would have been if either us had attempted it on our own.  Many times people will say “I really liked the line about…” and I’ll realize that was one Meg had written, even though she doesn’t remember it now.
I don’t know what God has in store for us in future, but it sure would be fun if we have another opportunity to work together again like this.
_____________________________________________________________

K.D. Hays and Meg Weidman are a mother-daughter team who aspire to be professional roller coaster riders and who can tell you exactly what not to put in your pockets when you ride El Toro at Six Flags. Meg is now a high school student who jumps on a precision jump rope team and loves art and reading anything not associated with schoolwork. K.D. Hays writes contemporary Christian mysteries as well as historical fiction under her own name, Kate Dolan. Although Meg resents the fact that her mother has dragged her to every historical site within a 200-mile radius, she will consent to dress in colonial garb and participate in living history demonstrations if she is allowed to be a laundry thief.
Toto’s Tale is their first book together.