The Gift of Mystery


Buried in a box somewhere in my closet is an old photograph. It was taken after the gifts were opened on a long-ago Christmas morning, and I'm sitting in my father's overstuffed chair. The thing is so big – or I'm so small – that my feet can't dangle because my toes barely reach the edge of the cushion. A stuffed cocker spaniel is tucked under one of my arms, and my face is buried in my Christmas gift – a new book. 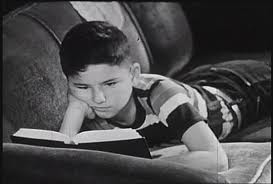 My dad was an avid photographer, but try as he might, each year my Christmas pictures were pretty much the same. My siblings' – inevitably blurry – were shot as they passed by on new bikes or roller skates. Me, I could always be found in that chair, reading. The family still-life.
Mystery novels topped my Christmas list, even then. Trixie Belden, Nancy Drew, Agatha Christie's Hercule Poirot or Miss Marple – I loved them all because I knew that, together, we would solve the crime and make the villain would pay. Order would be restored. All would be right with the world.
In fact, my favorite book of all time is a twist on mystery. It's Barbara Michaels' Ammie, Come Home, considered the best American supernatural mystery of the 20th century.
The story involves Ruth Bennett, owner of an elegantly spooky Georgetown brownstone, and her college-age niece Sara. One night Sara starts acting crazy. Or… could she be possessed?
“Dripping with atmosphere,” and downright “chilling,” Ammie is at its core, a story of the unlikely alliance – Ruth, Sara’s scruffy boyfriend Bruce, and college professor Pat MacDougal – that forms to save the girl.
As an adult, I appreciate the artistry of the writing, but when I first read Ammie, all I knew was that it took me to a place where evil was punished and good rewarded – even after death. And despite the fact that most of the characters in the book weren’t related to each other – much less to me – they felt like family.
That was important to me. 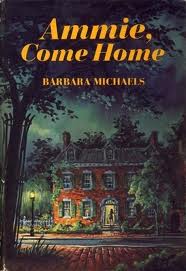 You see, Ammie, Come Home came out in 1968. My father was no longer snapping photos, he was dying of lung cancer. I was fourteen.
I was angry, because life seemed so unfair.
I was scared, because I knew my dad would die, as he did twelve days before Christmas that year.
And I was ashamed, because my awful secret fear was that my mom would die, too, and leave me alone.
In short, I was ripe for a fictional world to disappear into and, particularly, for a book like Ammie, Come Home. I needed to believe there was life after death. That family could form where there was none. And, most of all, I needed to believe that there was justice. Somewhere. Somehow.
A couple of years ago, I wrote an essay on Ammie, Come Home for the book Muses: 100 Classics That Inspire Today's Mystery Writers. When I got my author copies, I slipped one into an envelope and, on a whim, sent it off to Ms. Michaels.
You know what? She sent ME a thank you note, saying she was delighted that Ammie is still remembered so fondly. She seemed gratified – even mystified – that her work should have had such a profound effect on me.
That it had been such a gift.
As writers, we can't know what kind of day our readers are having when they crack open our books or fire up their Kindles or Nooks. They might just as easily be on a split vinyl chair in a hospital waiting room, as on a treadmill at the gym or a queue for the train.
But what we do know is what our readers want. Not just for Christmas, but anytime.
They want to be transported and entertained. They want order restored, if only fictionally.
And it's in our power to give that to them.
Lucky us.
________________________