The Gift of Poetry 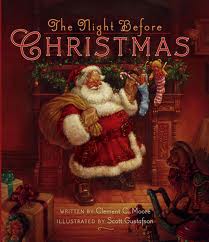 The hustle and bustle of Christmas week is an exciting time for children. The anticipation of the jolly old man in the red suit, long white beard and toys in a big red bag is at an all-time high. It’s been building for weeks. Most of the kids are trying extra hard to be nicer than usual so they won’t be put on Santa’s naughty list. Parents are reading ‘Twas the Night Before Christmas, the poem Clement Clarke Moore wrote in 1822 to their children. It’s a special time.
It is said this poem redefined our image of Christmas and Santa Claus because before the poem St. Nicholas, the patron saint of children, wasn’t associated with sleigh or reindeers.
This poem was first published on December 23, 1823 and was an immediate success. Moore’s neighbor sent it in to a newspaper and told them the author had to remain anonymous and he did so until 1844 when he finally claimed ownership and included the work in a book of his poetry. It is now a worldwide tradition in families to read it on Christmas Eve.
This poem has delighted children and parents alike for generations. I hope authors who write good words will publish their writings giving people all over the world the opportunity to read and be thrilled. Something you write can make a difference to someone; it can touch his or her heart, introduce them to new adventures or transport them to another time and place.
I wish for you this holiday season some time to write the next great poem or story for generations to come. Merry Christmas!