The Habit of Five 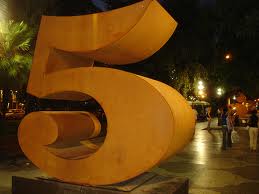 Jack Canfield in his book The Success Principles stated that he made a habit of doing five things each day to move his plan forward toward his goal. He used examples of doing five radio interviews, contracting five speaking engagements or reaching out to five editors of newspapers and magazines. No matter what the day would bring he would make the habit of five endeavors and stick with it.
Jack Canfield’s success is no secret to us. We know him for his Chicken Soup for the Soul, The Secret and The Law of Attraction as much as anything he has done. What many do not realize is that Jack studied under the great business leader W. Clement Stone and declares Stone as his mentor. His studies under Stone led him to write The Success Principles which are a collection of 64 principles of success and the stories that go with them. I found the five a day principle to be a great one.
So what five will you do today? Will you not only do it today but again tomorrow? In future days will you continue with another five? I know we may not have such high expectations as five radio interviews tomorrow but we do have something we can do that one day may lead to those interviews. Touch on five each and every day and see how far you can move your plan forward in a week, month or year. I believe you will be surprised. If you are let me know. I want to hear how you have done. Make it a habit that you will not want to break.