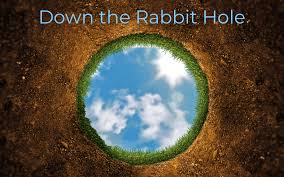 Sometimes research is simply random in its trail.  Sometimes, however, unforeseen data has led me to a treasure of information that is completely surprising.

I was in the midst of completing the manuscript of my third book. Including many details of the Southern Campaign and South Carolina during the Revolutionary War, I planned a chapter that included an imaginary visit of Marquis de Lafayette to my protagonist.  As usual, I intentionally researched this nineteen-year-old, French soldier who desired to fight against the British and beside General George Washington.  My questions snowballed.

Why would he leave France to fight another country’s battle for freedom?  Why did he leave his young pregnant wife? Why did he become such a friend to our country?  Why did he reject his sovereign’s command to not leave France and ignore the arrest warrant?  Why would he accept a commission in the Continental Army without pay?  Was he solely an adventurer that lacked maturity?

These questions drove me to find answers. There are always reasons for our actions, and the more I read about the Marquis, the more I wanted to know what drove him into a disguise and then onto a ship to cross the Atlantic. Strong motivations obviously propelled him.  And so, putting the puzzle pieces commenced.

Born in 1757, Marie Jean Paul Joseph Roche Yves Gilbert du Motier, Marquis de Lafayette, lost his father before he was two.  His father fought fiercely and died in a battle against the British.  His mother and grandfather died when he was twelve, and after his formal schooling, he joined the French entourage of King Louis XVI and army. He married at sixteen.

The word liberty became popular at court, and he listened closely to what was occurring in America.  Lafayette and other officers wanted to strike a blow of revenge against the British for the Seven Year’s War.  Buying his own ship, called Victory, to cross the Atlantic Ocean, he learned to speak a smattering of English on his two-month voyage to America.

Then what I thought was truth shifted. 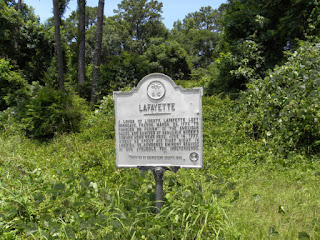 Sitting at a Sons of the American Revolution dinner one night, I met a couple who told me about Lafayette sailing into the property of Benjamin Huger near their hometown of Georgetown, South Carolina.  All I had read was that Lafayette arrived first in Charleston.  Excited by this twist, checking revealed his first stop was at the plantation of Major Benjamin Huger of French Huguenot descent.  Spending a few hospitable days there, the Major’s young son Francis made friends with Lafayette.  Years later, as an adult, Francis later rescued Lafayette from an Austrian prison after the French Revolution. Unbelievable connect!

Lafayette’s influence on Francis was long lasting and inspirational.  He was not an adventurer.
In reading Lafayette’s letters and papers, the word liberty and its importance were often the subject.  His family’s coat of arms includes the Latin words, “cur non,” meaning why not.  It was in these words that I finally found the answers to my questions about the young Lafayette and his intense love of liberty.  Neither his youth nor his age nor his station in life kept him from fighting for liberty for our country and his own.  He faced life, not with a what if, but with a why not, and others pursued the same.

Research stimulates my mind and my imagination.  The newness is exciting.  I look at events and people with fresh eyes, recognizing both similarities and differences.  Seeking answers to what truly happened next helps me understand what might occur next in my biographical fiction.

A graduate of Converse College with both bachelor’s and master’s degrees, Sheila Ingle is a lifelong resident of S.C. Her published books, Courageous Kate, Fearless Martha, Brave Elizabeth, and Walking with Eliza focus on the bravery of Patriot women living in Revolutionary War South Carolina. Tales of a Cosmic Possum, not only shares Ingle family history, but also South Carolina and cotton mill history. Serving on the board for eight years of Children’s Security Blanket (a 501c3 organization that serves families that have children with cancer), she is the Board Chairman. She is also a member of Chapter D PEO, where she served as vice president and chaplain; Circle 555(a local women’s giving group), where she has served on the grant committee; and a board member of Spartanburg County Historical Association, serving on the Walnut Grove Committee. Married for thirty-eight years to John Ingle, they have one son Scott. Besides being avid readers, the South Carolina beaches are their favorite spots for vacations. Social Media links: sheilaingle.com   Facebook: Sheila Ingle, Author   @sheilaingle1