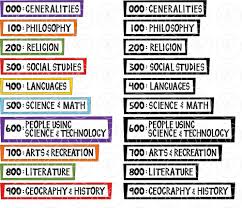 I have always loved books. I remember most of the elementary classrooms had a large bookshelf with many of the classics. We were free to look through them and as far as I knew they weren’t in any order. We never worried about taking one out and putting it back out of order.

All that changed as I got older and started using the High School and College libraries. It seemed to me as I entered a library the emphasis was on the order of things. I remember being introduced to the Dewey Decimal System. My first thought was who thought of such a tool of torment. A system of decimals created by a man named Dewey had taken this wonderful place to browse for fun, adventure and wonderment and changed it to an orderly world of books with numbers.

I felt hopeless and began to rely totally on librarians and their leadership. I thought this was done for them to maintain power and authority over the orderly structure of all these books. I could see the need to maintain some form of order but what seemed to me to had been done was take people like me out of the picture and make us dependent upon the librarian.

My two main concerns dealt with my pride. Not knowing or understanding the Dewey Decimal System and admitting it by asking where to find a book. The second issue was once having the book and deciding it may be the wrong one, I had no idea where to go to put it back. With today’s friendlier libraries and librarians, I doubt I would have ever had this concern. One thing I have noticed is a YouTube presentation on the Dewey Decimal System I have watched. Simple instructions along with a chart that makes sense.

While visiting with a school administrator she explained to me she was getting children to read by making changes. One of the changes was the children’s library in the elementary school was arranged like a bookstore you would go into, by genre. It appears to hide the intimidating system and allows more browsing like we did in elementary school. The truth is the genre method was always there but the emphasis was on the decimals.

My granddaughter is a freshman in the largest high school in our state. It is a new plant costing near $100 Million. It has a marvelous library. I asked my granddaughter if their library was arranged by genre. She looked puzzled and answered yes as if how else would you do it. I was glad to hear that. I began to think this was more the norm. I must say her library bright and open, looks like a park with benches and oh yes food from the cafeteria is allowed. I think I would feel at ease in that library. It sounds like schools are doing what it takes to get kids to read books.