What I Learned Before Producing an Audio Book 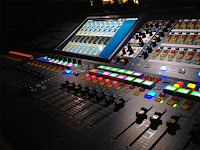 After producing my first audio book, I learned that skipping a ‘read it out loud’ editing pass means you’re going to miss things. Heck, even when you do read it aloud, you can still miss things, as I’ve always caught glitches when I’ve listened to the narrations. When you do your own read aloud, your brain will still see what it expects, and you’ll read what it’s supposed to say, not what itsays.

That’s when I investigated having my computer read my manuscript to me. I’d tried it a long time ago, and the robotic voice was impossible to listen to. However, there have been improvements in the system, so I decided to give things another shot. (Note: as an indie author, I can still make changes after edits. If you’re traditionally published, you’ll probably want to take this step before you send it off.) Word has a ‘speak selected text’ option. There are pros and cons, and here’s the process in a nutshell.

First, you need to add the “Speak” option to the Quick Access Toolbar, which is up at the very top of a document and has the icons for ‘save’ ‘undo’ and ‘redo’. There were plenty of simple to follow tutorials with pictures, so this step wasn’t hard. You go to “Customize Quick Access Toolbar” which on my version of Word is a little drop-down arrow way at the top, then choose “All Commands” and scroll down to Speak, then click Add.

Then it’s a matter of highlighting what you want the voice to read and listening.
(Note: I recently updated to the subscription version of Office, and there’s an even better way to have the computer read to you, but since a lot of people don’t use that, I’m not going to go into the differences here.)

There’s a major difference in listening to a narrator’s rendition of an audiobook and having a computer read it. At least the narrator is performing the book. The guy who’s reading my text to me (I call him Fred) isn’t quite a robot, but there are things to get used to.

What I’ve learned so far.
Pros:
1. “Fred” is going to read exactly what’s on the page, unlike the audiobook narrators who sometimes leave out words, or substitute others. For example, I’d read this paragraph countless times, as had my editor and critique partners. She drove the up the dirt lane. A beam of sunlight shone through a break in the gray winter sky, reflecting off a sprawling white two-story house, as if to say, This is your light in the darkness. Yet I never saw the typo. But when “Fred” read it, the extra “the” jumped right out.
2. It forces you to go slowly. I look for the same things I looked for in the audiobook proofing process—wrong punctuation, improper spacing, and the like. If I catch repeated words that evaded my eyes but not my ears, I’ll fix those as well.

Cons:
1. There are limits to how big a selection it will read, somewhere around a single-spaced page. I believe it’s going by character count, as when you select too much text, it often stops mid-word. I find this nice, because it gives me breaks from the monotony.
2.  There will be pronunciation errors. “Fred” doesn’t read in context. He doesn’t emphasize words in italics. He speeds up for dashes and hyphens. Words that are spelled the same (read/read; live/live) will all be pronounced the same, which can give you a jolt—but that’s good, because it makes you pay attention.
3.  If you pause to stop the reading (clicking the icon stops it), when you click the icon again, it will go back to where you started with the selected text, so you need to remember to unhighlight the parts he’s already finished and re-select from where you left off.

From childhood, Terry Odell wanted to "fix" stories, so the characters would behave properly, although it never occurred to her to write her own. Once she began writing—which didn’t happen until her AARP card was well-worn—she found controlling her characters wasn't always possible, as evidenced when the mystery she intended to write turned into a romance, even though she'd never read one. Odell prefers to think of her books as "Mysteries with Relationships." After writing eight romantic suspense novels, she finally broke into the mystery genre with Deadly Secrets, and continued that series with Deadly Bones, Deadly Puzzles, Deadly Production, and Deadly Places. Her newest release is Deadly Engagement, the 6th offering in that series. She writes the Blackthorne, Inc. series, the Pine Hills Police series, the Triple-D Ranch series, and the Mapleton Mystery series. Her short story collection, Seeing Red, is a Silver Falchion winner. Where Danger Hides, the second book in her Blackthorne series is a HOLT Medallion winner. You can find her high in the Colorado Rockies (that's altitude—she lives at 9100 feet!) watching wildlife from her window when she should be writing, or at her website, terryodell.com.