The Power of the Notebook 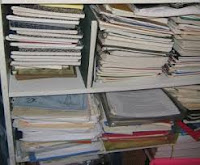 I have to admit that I am a notebook hoarder. There’s nothing I love more than new brightly colored notebooks, but not because of the color. I love them because each one holds possibilities. For me, a new notebook means a new novel.

My most recently-completed novel began three years ago as I sat at my breakfast nook one morning having a cup of coffee. I began to see images of people, images of places—familiar places—and though I didn’t know the people, I kept seeing them until I’d given each one an identity. In my notebook, I jotted down names and physical characteristics. I wrote little snippets about the town where they lived in Ireland.

From the images that I saw, I knew the time frame must be in the early 1900s. One particular image captured me more than the others. It showed a young woman drowning in the waters of a great body of water, and it brought to mind my fascination with the sinking of the Lusitania in 1915, yet I had no idea how a young Irish woman would be sailing on the great ship, and while research provided me with facts, I had to keep searching for personal accounts of the incident.

My notebook began to take on page after page of notes, but I hadn’t yet begun a story. And what was the point of all the notes if I couldn’t come up with a story? But then, most of my works have begun this way. I see the same images repeatedly, and then I begin to record what I see in a notebook.  But the entries I’d made were random and seemed to have no connection to each other. At this point, they covered several events of note, mostly political, in Irish history and spanned about twenty-five years. And because I had no desire to write about politics or riots or killings, very few of them were helpful.

So, I began delving more closely into the personal accounts of the Lusitania disaster. With the help of the Google search engine, I’d found several, but most of them were from crew members who’d miraculously survived the sinking. And though these were helpful, what I needed was something more personal. After all, one of my new characters would be directly involved. She would be the young woman I’d seen drowning in the waters.

For about a week afterwards, I’d go through my notebook in the mornings, hoping that something I’d jotted down would give me the kernel I needed for the new story. And then one morning, I had that moment, the one that says, “That’s it. There’s your story!”

I grabbed my highlighter—the green one—and drew a circle around a very short entry I’d made months earlier about a tiny town in Ireland becoming famous as the site of an international GeoPark. I’d been to the town and I’d seen the wondrous caves, the underground lakes, and the natural stone carvings first hand. And because I knew the town so well, I was quite comfortable installing my new characters as residents.

The now-tattered, lime green notebook had served its purpose. A book was being born, slowly but surely.

Joy Ross Davis is of Irish descent and a student of the lore and magic found in the hills of Tennessee. After a twenty-five year career as a college English professor, she traveled to Ireland and worked as a writer and photographer, publishing numerous travel articles and photos for an Irish travel agency. She has been a contributing feature writer for a local newspaper and has published articles in Southern literary magazines. She lives in Alabama with her son and beloved dogs. She loves to speak at conferences, book club meetings, and events to share her connection with angels and the stories behind her books. Contact her on Twitter @joyrossdavis or Facebook.  Check out her boards on Pinterest.