Writing While Life Goes On

I read. I write. I see visions. I teach exercise. I’m retired. Which of those five statements is a myth?  Right. Retirement. It doesn’t exist and those of us who wait to do things until that time arrives waste a lot of creative energy.

I have retired more than once; did it in stages. Left the full-time job to work part-time. Skipped around from one employment to another, reducing the hours required until I finally chucked it all—then went back to teaching group exercise, land and water.

During the down-time of part-time jobs, I enrolled in on-line writing classes. Found some reasonably priced and instructor led rather than peer led. Well worth the money. Group comments were helpful; instructor’s comments encouraging. Later, I enrolled in a peer led class with syllabus and writing assignments prepared by an instructor.

One thoughtful assignment was to imagine and write about a blade of grass. I could. I did—kind of. I knew the idea was to think deeply about that blade of grass, to mentally touch and feel the product of nature. I just couldn’t, not after I peered out the window at my yard, barren under the trees and brown from another product of nature.

Living in the South, one learns that growing a lush green lawn is an arduous, expensive project.  There are the periods of drought followed by a deluge of rain. There are the hot summer days when the temps crawl toward the 100s and the dew dries up before the first cup of morning coffee. I did think of the struggle that blade of grass endured in my yard every day.

I imagined the blade bent over from the owner’s size 13 shoes trudging a path to retrieve the morning paper.  It would take all day to get the kinks out.

Suddenly, the blade hears thumping and marching. It’s the ants, in their never-ending column, up, down, back and forth. All day long. “Can’t you give a guy some peace?” he yells. The blade just wants a little moment of quiet so that he can grow.

The earth around him starts to vibrate. “Not again,” he fumes. The kids are playing ball. He slips and slides sideways to avoid them. No such luck as they trample him, followed by the family pet who does what all family pets do. 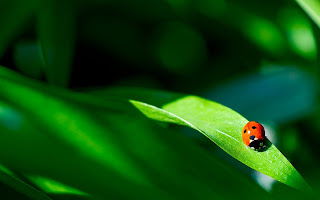 In the quiet of the late afternoon, the blade thinks he’s survived to live another day, until he hears a motor. The final insult; the owner on a lawn mower trimming the new growth. The blade smiles and thinks, “That’s okay.  I’ll grow a couple of inches tonight.”

I did think about the blade of grass as I tamped down the mole hills and surveyed the brown grass left after the army worms marched through the Bermuda like Sherman to the sea. Couldn’t get all warm and fuzzy though, but I did learn that most anything can be a character in a story. Just have a vision.