The Not So Invisible Bronte Sisters 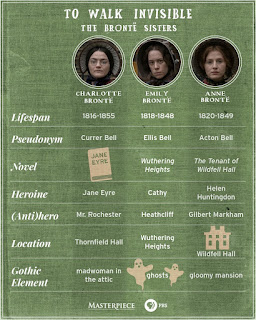 The Bronte Sisters lived in a time when women had no rights and their fate rested in the hands of their fathers, male siblings or husbands. I would not have been well suited for that era.

As a reader, I was familiar with the Brontë sisters’ famous Jane Eyre and Wuthering Heights books. I never knew much about the authors past those works until I watched the PBS Masterpiece drama, To Walk Invisible.

I viewed the movie with much anticipation. I was excited to learn more about these women. Yes, it focused on their troubled brother and showed just how at risk they were had they not been published, generating a much needed income. After all, their body of work evolved from their very real circumstances. It drove me to find out more about these sisters.

The movie revolves around young adults Charlotte, Anne, and Emily, the surviving of five sisters. Two of the sisters succumbed at the ages of 11 and 12 to tuberculosis after living in a boarding school. There is a scene in Jane Erye where the protagonist's best friend, Helen, dies while they are in school.

They kept their success as authors a secret to protect their only brother from the truth. Their brother, Branwell, wanted to be a writer but was easily distracted by an affair with the married mother of one of his students. This led to his downward spiral into unpaid debts, alcoholism, and drug addiction. His sisters and widowed father endured. They somewhat enabled an increasingly difficult and toxic relationship with Branwell. As Emily states in the movie to her father, we agreed to write under our initials as the "Bell Brothers" so we would not hurt our brother; "It would be like rubbing salt into a wound."

The trio never intended to reveal their true identities. The movie title, To Walk Invisible, is a quote taken from a letter penned by the Charlotte. However, an event required Charlotte and Anne to travel to London and meet with their publisher. The sisters' pseudonyms were male, but readers had their doubts. In a twist of fate, they began publishing under their actual names around the time their brother died.

Prior to this movie, I knew very little about the Bronte family. Clearly, the Bronte Sisters' realities are woven into their works of fiction. I see shades of their widowed father and Branwell in the two books I've read. 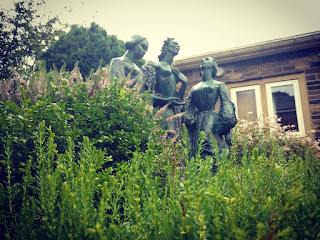 The Brontes lived in Haworth, Yorkshire, in the north of England. I was delighted to see the movie show the bleakness of treeless moors. Carriages covered in mud as were the horses and ladies' skirts that dragged the ground. In one scene, the grayness shows Charlotte walking into town in what appeared to be a chilly, windy and drizzling rain. The movie captured the era and settings as found in the Bronte sisters' books.

Well done PBS Masterpiece. If you watched the movie did you find yourself wanting to re-read their books?