Each time I attend a writers conference, as I had the pleasure of doing this weekend, I come away with a renewed sense of the community spirit that writers share.  It's a brotherhood and sisterhood unique in the fact that we all have something to say.  Not only do we respect each other's right to say it, but we're eager to help each other do so.

The folks who visited my table for 15-minute one-on-ones were all promising writers with diverse interests: songwriting, playwriting, creative fiction, and more.  They were each working on projects at various stages of completion.  But what they all had in common was the question, "Now what do I do?" 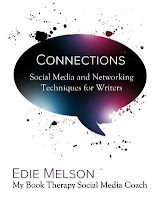 My first question back to them is to find out whether they have a platform for promoting their work. I'm quick to recommend Edie Melson's comprehensive but easy read, Connections: Social Media and Networking Techniques for Writers.  Lots of books offer advice on using Facebook for marketing, but few address specific promotional tactics to help writers develop an online audience, and Edie has practiced what she preaches with great success.

To those who want to know how to approach a publisher with what they've written, I then pull out my copy of W. Terry Whalin's Book Proposals That $ell: 21 Secrets to Speed Your Success.  From coming up with an elevator pitch to putting together the whole presentation package, Terry's voice of experience as an acquisitions editor has helped countless writers learn how to get their feet in the door and their manuscripts looked at.

Occasionally, I can even answer a writer's question without the aid of a book! But in moments like these I'm reminded of how grateful I am for Terry and Edie.  I'm especially grateful that they contribute their talents to each issue of Southern Writers Magazine.

As a huge movie buff, I have an affinity for the insights of screen and stage writer Shelly Frome, who left his mark in the Big Apple before taking up roots as a Southern novelist.  Shelly's articles on screenwriting also appear in each issue.  He explores themes, scenes, character motivations and much more from an insider's perspective.  If you like to ponder the psychology of what's on the silver screen, Shelly is the man in the director's chair.

Acclaimed Virginia poet and author Sara M. Robinson is one busy gal.  In fact, she presented at another convention herself just a few weeks ago.  But she finds time to contribute her deep thoughts via "Poetry Matters" in each issue.  Her ability to analyze prose and its purpose is of TED Talk caliber.

C. Hope Clark is another regular in the mag who parlays her talents as a novelist into valuable instruction, in this case on writing dialogue.  You can catch a glimpse of Hope's enviable ear for the spoken word via an entertaining new video she and I collaborated on, called What Rhett and Scarlett Can Teach Writers About Dialogue at bit.ly/RhettWrite

What can I say about Steve Bradshaw besides that he is a scholar and a gentleman, and has seen more corpses than Vlad the Impaler? Well, that's been a necessary evil in his career as a forensic investigator, biotech entrepreneur, and now a celebrated mystery author. His articles in each issue dig into medicine and murder as only someone who has investigated over 3.000 unexplained deaths can do, so that you don't have to. 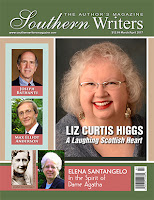 We couldn't do what we do without those talented folks, much less the 30 to 40 authors who appear in each issue and an awesome writing staff that includes Vicki H. Moss, Chris Pepple, Jessica Ferguson, Londa Hayden, Barbara Ragsdale, and Annette Cole Mastron, who also makes this very blog you're reading happen.  Put them all together with our fearless leader, Editor-in-Chief Susan Reichert, and it adds up to a collaboration much greater than the sum of its parts.

This is not so much a shameless plug for the magazine (although it is!) as much as a well-deserved plug for these authors and any others who sacrifice their own precious book-writing time to show other writers how it's done. We never take them for granted, and I hope when you meet them at a conference, you'll take a moment to thank them too.