The Perils of the Private Eye 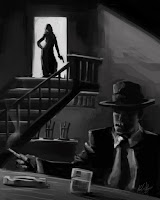 Remember the hardboiled detective? The private investigator hired to save a client wrongly accused of some heinous crime was a staple of page and screen for many years. But in our casual-Fridays world, the detective who stood out for wearing a cheap suit is long gone. Characters solving crimes these days usually work in law enforcement or serve as consultants to the police.

So when I started writing cozy mysteries, why did I decide to make my sleuth Karen Maxwell a private investigator? The obvious answer would be that I didn’t know what I was doing. But I prefer to think that I did it to challenge myself.

Here’s why it’s a bad idea to use a private detective in a modern mystery.

1)      First of all, there is no such thing as a private detective. Detectives work for the police. “Private eyes” work for investigation firms, and most of their business consists of doing background checks. Clients often hire investigators to find out who’s stealing from them, but they don’t hire them to solve murders. So if the lead character is a private investigator, she’s not going to be solving murders, and most people pick up a mystery expecting to find at least one or two dead bodies lurking in the pages. But in this situation, it actually works in my favor. I tend to write with a lot of humor and it just didn’t feel right to have characters snarking at each other over breakfast cereal while people are dropping dead all over town.

2)      The second problem with using a private investigator as my fictional crime solver is that a competent investigator already has a pretty good idea “whodunit” by the time he or she goes out to a site to investigate. There may be a couple of suspects, but nowhere near the number of red herrings that are required to sustain a good mystery plot. What’s my solution to this problem? I deviate from reality here and have my investigator spend more time “undercover” than a client would realistically pay for.

3)      A third problem with using a private investigator as my fictional detective is that most investigation work these days is done on the computer. If I write a story where the heroine comes to the office and sits in front of her computer for eight hours, it’s not going to be much fun to read even if I have her associate turn the coffeemaker into a Feng Shui aquarium. My solution to this problem is two-fold. First, I skip over most of the computer stuff. Second, I would have Karen get even with her associate by doing something like covering his motivational posters with banana stickers and sardine labels. It may not advance the plot, but at least it’s a change of pace.

Of course, there are some advantages to using a private investigator. For starters, it gives her real reason to get involved in the first place. I don’t have to make my character a busybody or know-it-all—she gets involved and starts asking questions because that’s her job. And because it’s a new job and she’s not very confident about either her abilities or her status in the firm, her insecurity creates a sense of tension.

Kate Dolan began her writing career as a legal editor and then newspaper columnist before she decided she was finally ready to tackle fiction.  As the author of more than a dozen novels and novellas, she writes historical fiction and romance under her own name and contemporary mysteries and children's books under the name K.D. Hays. Her book Roped In now available in print and ebook! When not writing, she enjoys volunteering as a living history interpreter, coaching jump rope and riding roller coasters with her daughter.  She loves to connect with readers on Facebook and through her website, www.katedolan.com   https://twitter.com/KDHays     https://www.facebook.com/Kate-Dolan-255723894451936/ https://www.facebook.com/Totos-Tale-158336124177702  http://katedolan.com/blog