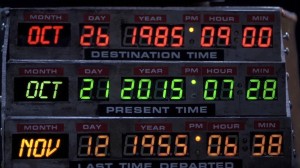 October 2015 was a milestone month for fans of Back to the Future, having reached one of the target dates in Marty and Doc's cinematic adventures. Three decades after its release, the trilogy boasts a cult following of DeLorean restorers, cosplay devotees, and less fanatical folk who simply enjoy well-told tales.

With that enduring popularity in mind, I offer seven things that make the Back to the Future series worth a second look for writers.

1. Lack of a hero arc
Unlike the typical protagonist, Marty doesn't experience an inner change that makes him grow as a person by the end of the story.  Instead, everything around him changes.  For the audience, that is satisfying enough. Just like James Bond, Indiana Jones or Frodo, the hero is consistent from story to story, while it's the new adventure providing the variety.

2. Back to the Future wasn't going to be a trilogy
Screenwriter Robert Zemeckis had only intended to make the one movie.  Only because of its enormous success did he write two sequels.  Had he known up front that would happen, he says he would have ended the first movie differently: He wouldn't have had Marty's girlfriend get into the time machine. He would have preferred for Marty and Doc Brown to go on their next mission alone.  That script complication was dealt with (a little too patly) by zapping her with a ray to make her think it was all a dream. The lesson here is: The End might not be The End, so be forward-thinking just in case you're lucky enough for fans to demand a followup.

3. Believable characters
To maintain realism in a fantasy, it helps to anchor it with characters who react like real people.  There are no wild and crazy sidekicks or talking animals to suspend belief.  Even the quirky Doc Brown is no more off the wall than your crazy uncle.  Each character contains humanity that invites us to invest ourselves in them.

4. Keepin' it Real
As for the fantastic storyline, Michael J. Fox himself makes the observation that the more radical visionary aspects of Back to the Future still maintained some resemblance to life as we know it. For example, he says, flying cars wouldn't need imaginary lanes to drive in; they have the entire sky in which to navigate. But flying cars are fantastic enough without giving the audience too many additional concepts to distract themselves with. 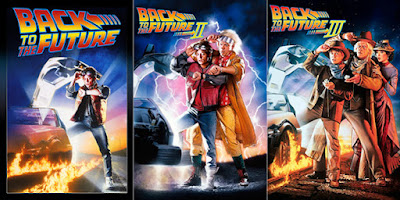 5. Reassuring repetition
Like the movie posters that echoed each other, repeating gags and catch phrases from film to film also gave the audience a comforting sense of familiarity. Whenever Biff taunted, "What are you, chicken?", we knew Marty was about to go full McFly.

6. Be Flexible
When producers couldn't strike a deal with Crispin Glover to reprise his role as Marty's dad, they brought in another actor and tried -- in vain -- to fool audiences using prosthetics, showing him upside down or at a distance, etc, to awkward effect.  To ease everyone's pain, they eliminate him as soon as possible.  Bottom line: If one of your characters is giving you too much trouble, don't try to negotiate; write him out entirely.

7. Take advantage of marketing tie-ins
Like cozy mystery authors who offer recipes and other tangible story elements to fans, Pepsi is capitalizing on one of the iconic series symbols this very day. A bottle of Pepsi Perfect, in a collectible container, sold out faster than 88 MPH on October 21st. Public demand, however, made 6,500 of them available again for, appropriately enough, $20.15.  They went on sale today, November 3rd, at 8:00 a.m. Central. (Update: They sold out within ten minutes.) http://shop.pepsi.com/

Some say Back to the Future is the best-written trilogy of all time.  Bob Zemeckis won't even attempt a fourth one lest he do it a disservice.  We can take many cues from Marty and friends in our own quest to write a story that stands the test of time.