10 Things Writers Can Learn from The Beatles


With the 50th anniversary of The Beatles being celebrated this week, it seemed like a good time to review some of the things the Fab Four taught us about creativity, collaboration, and just plain cool stuff. Here, then, are selected lessons from Liverpool which writers can benefit from eight days a week. 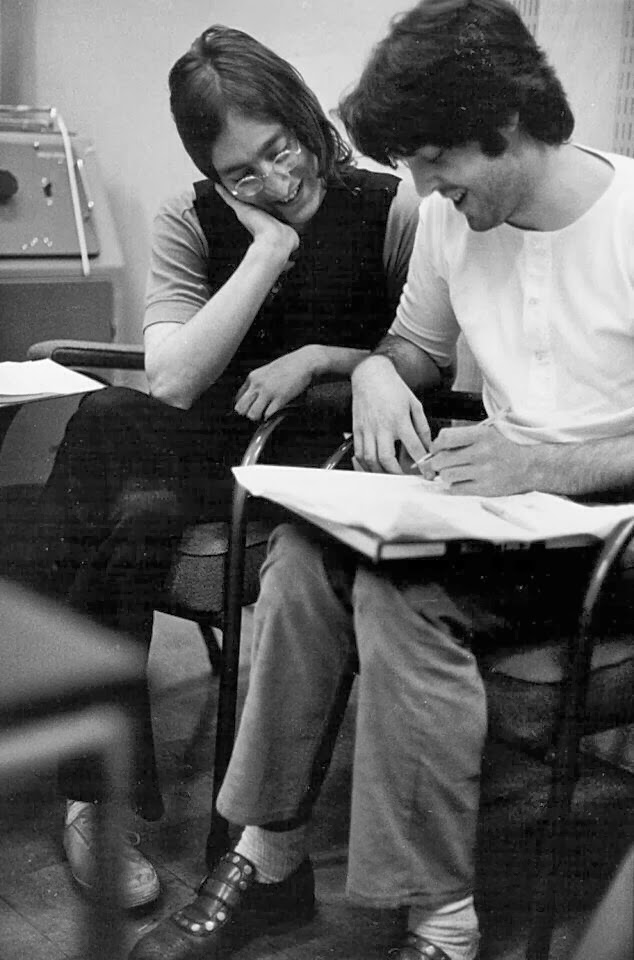 1. They studied their writing heroes.
In their first few albums The Beatles included 23 cover songs by songwriters and artists they admired, from Chuck Berry to Buddy Holly and even Buck Owens. By following the examples of the masters in their field, they learned the ropes and climbed them to a whole new level.

2. They built a platform.
Before they ever showed up on vinyl, they took the long and winding road to stages from Liverpool to Hamburg, making a name for themselves and creating a demand for their product in advance of the product.  Youngsters bombarded record stores trying to buy something that didn't even exist yet.  If The Beatles were starting out today, you can be sure they'd be all over social media and YouTube.

3. They drew inspiration anywhere it could be found.
(No, I don't mean marijuana.)  You may have heard the story of how "Yesterday" came to Paul in a dream, and how a drawing by John's son inspired "Lucy in the Sky with Diamonds", but that's just the tip of the idea iceberg.  Circus posters, ambulance sirens and wives who wouldn't return phone calls led to some of the most memorable songs in the Beatles catalog.

4. They weren't afraid to experiment.
(I'm still not talking about marijuana.) Their quest for creativity knew no bounds. They were always pressing producer George Martin to come up with new recording effects and unique instruments to try. Even the sound of Ringo's drum kit was revolutionary because for the first time, microphones were placed close to the drums instead of at a distance. Pop music has been miking drums that way ever since.  From string quartets to sitars, from backwards effects to tape loops, The Beatles introduced things teenagers (and most adults) had never heard before. What new tools might you use today? 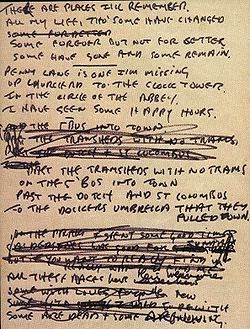 5. They were tweakers.
To hear their meticulously crafted songs it's hard to imagine the rough first drafts they started out as. But outtakes don't lie, and it's a fascination to hear the sometimes awkward and even sloppy early versions of some of their greatest hits, which sometimes took two dozen or more takes before they were satisfied. Lyrics were especially prone to revision. Lennon's beloved "In My Life" (left) was originally an ode to Liverpool landmarks until he rewrote it as a love song.

6. The Quiet Beatle didn't stay quiet.
With frontmen Paul and John writing hit after hit, one might think George Harrison wouldn't even try to compete as a songwriter and invite unfair comparison in this most visible of venues. But he let his own talent speak for itself and wrote roughly 1/10th of the Beatles 200+ album songs. His own "Something" remains the second most-covered composition in their catalog behind "Yesterday".

6. They were smart collaborators.
Relying on their individual strengths, the songwriting team of Lennon & McCartney was often really just one or the other, with a healthy dose of influence from the silent partner.  Legend has it that Paul kept John from getting too hard, and John kept Paul from getting too soft. Other times they would both come in with unfinished songs, and then put them together to create a complete composition. They were also not opposed to enlisting a little help from their friends, like Eric Clapton, who plays one of the most famous guitar solos on the White Album.

7. They knew when to change course.
That is, they recognized when spending too much time touring was cutting into the creative process. When they performed their last concert in 1966, it was specifically to spend more time writing and recording. Several years later, they saw that artistic differences were getting in the way and broke up.  They could have hung up their hats while they were on top, but instead embarked on successful solo careers.  Worth pointing out also is that John later took five years off when he decided it was more important to just be with his family. 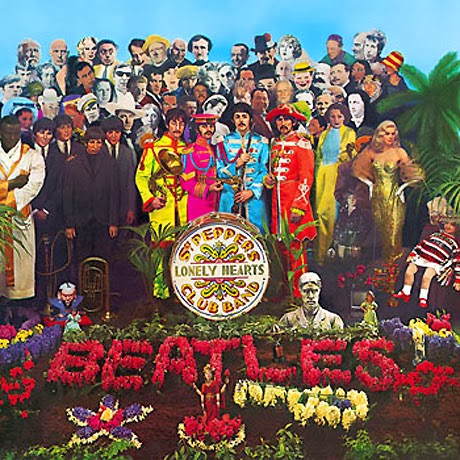 8. They had great covers.
The Beatles invited you to judge a record by its cover, via some of the most imitated album art in history.  How many people have had their picture taken walking across Abbey Road?  And the cover of "Sgt Pepper's Lonely Hearts Club Band" attracted more analytic attention than virtually any album before or since. Of course, they didn't create these covers themselves.  They had the pros do it.

9. They paid it forward.
After achieving success of their own, they found and fostered others with budding talent, most notably Mary Hopkin ("Those Were the Days'), Badfinger ("Come and Get It"), Billy Preston ("Will It Go 'Round in Circles") and James Taylor (too many to count).  All of them started out on the Beatles' Apple label.

10. All you need is love.
Writers who don't write typically blame it on not having enough talent or time, or because they think they won't succeed.  Writers who do write do it because they love writing so much that they have no choice. Those are the folks who go from being a nowhere man to a paperback writer. For them, happiness is a warm pen.

So get back to where you once belonged (at your computer, writing). A good time to start might just be Wednesday morning at five o'clock, as the day begins...