While visiting favorite relatives in North Carolina this weekend, I joined them for an excursion to historic downtown Hendersonville, where their fine arts festival, Art on Main, was in full swing. We strolled the streets, encountering metal workers, portrait painters, authors, blacksmiths, and apple-flavored ice cream, though my favorite discovery was an enormous general store called Mast, a multi-story warehouse of curiosities which was like a Farmer's Almanac come to life.  Their candy department alone was a treasure trove of forgotten and obscure confections. 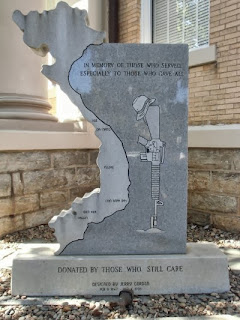 Taking a break from all our walking, we soon camped out on park benches next to a city building.  As I toothfully worked on my first-ever Big Hunk (a taffy-like creation of honey-flavored nougat) I couldn't help but notice a concrete memorial right in front of me, honoring Vietnam veterans. It caught my eye because of its unique shape (that of the Vietnam coast itself) and also because at the very bottom was carved "Designed by Jerry Gordon, 1947-1995".

I thought it was ironic that someone who took the time to design this tribute has himself been immortalized, to the point where his name will also be seen in this spot for generations to come.

It brought to mind that you and I will someday leave behind a legacy of our own. The question is, what will that legacy be? As writers, we may hope it will be in the form of a bestseller that's still available fifty years from now.

The great authors who came before us are not only remembered via the printed page, but were found worthy of their own memorials. The homes of Emily Dickinson and Robert Frost are popular Gracelands in their own right. Walt Whitman and Kurt Vonnegut have libraries named after them. A wax figure of Mark Twain can be posed with in more than one American city, as well as in Canada.

These beloved writers became beloved by leaving a legacy of literature that captured the times as well as  the hearts of their readers. The book you're working on right now may well become the masterpiece that defines 2013 to a generation to come.  A lofty suggestion, perhaps, but it's unlikely that Nathaniel Hawthorne ever imagined that his likeness would grace the place he used to embrace. 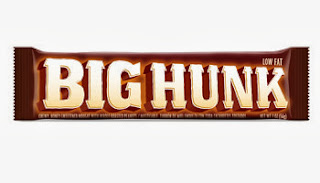 Our literary efforts may or may not earn us a concrete memorial or a statue in our local park, but it's something to strive for.  Next time you're thinking that writing is a monumental task, celebrate the fact that it actually could be.

Personally, I'd be happy if they'd just name a candy bar after me.  I like to think they already have.