"Y'all" Jogs My Memories 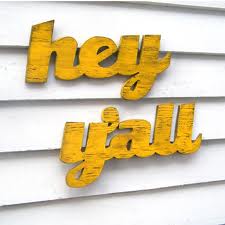 Even though I know the plural of “Y’all” is “All y’all,” I am not a Southern writer. So imagine my surprise when Southern Writer Magazine asked me to guest post here. However, as all authors, aspiring and otherwise, should know: never pass up a marketing opportunity. So, of course I didn’t tell them I was a Yankee, and instead simply replied, “Sure!”

When I was growing up, I did spend quite a few summers visiting family in , in a small town outside Winston Salem. I started my first novel, Sundance, there. Okay, so I was only twelve and Sundance never really took off as a great literary work, but it was set in the South on a farm. I don’t know how the folks at Southern Writer Magazine could have found out about my first literary endeavor, but perhaps that’s what got me grandfathered in as a southern writer?

During those summers, I learned about grits and okra and kudzu. Tomato sandwiches, sweet tea and pulled-pork BBQ. Red dirt and tobacco drying sheds. I learned to say “Hey” not “Hi.” And I watched bank tellers cry the day Elvis Presley died. I dated a couple of southern boys, their southern accents absolutely my undoing.

I am a girl. After a few life detours living elsewhere, my home now is only a few miles from where I was born. Here I know deep-dish pizza and Chicago Dogs (no ketchup!) and when I get together with old friends, my accent gets so nasally I can’t stand to be around myself. I know if Blues legend Buddy Guy passed away, we’d of course be sad, but I don’t think any bank tellers would be crying.

When I was working up the ranks at my other career, flying airplanes, I flew for a corporation based in . I like to say, “I spent a year there one summer.” I was on my own and let’s just say the townsfolk were not terribly friendly. Toward the end of that long summer, I had to fly a trip to and as I was driving back to the airport, I stopped by a roadside stand to buy some peaches. It was very hot and the lovely elderly woman working the stand was fanning herself as she drawled to me about the sun and the peaches and I don’t remember what all, but I do remember her kindness. I remember getting back into my car and making it about a quarter mile before bursting into tears. It was the nicest a complete stranger had been to me during that whole horrid summer.

While I am not a southern writer, I learned a few things from my brief time spent in the South. I learned to enjoy a warm night on a porch swing with crickets screaming. I learned to slow down, that cheese grits rock and that I have yet to find a place within five hundred miles of here with decent pulled pork. I learned that kindness and a smile for complete strangers is the norm in the South and I learned to appreciate that warm southern hospitality. 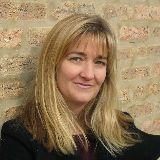 "I began building my flight hours as a flight instructor at the University of Illinois Institute of Aviation. Several years and airline uniforms later, I landed (sorry) at a major airline in 1990. I returned to my fiction writing in earnest. My plan had come together. After several false starts on a few different novels, in 2002 I finally finished what I considered a viable draft of Wish Club and began the long process of getting it published. Wish Club was released by Three Rivers Press, a division of Random House, in June of 2007, to great press and reviews. My second novel, Down at the Golden Coin, has just been published in trade paperback by Eckhartz Press and will soon be available here at Amazon as an ebook. I am now at work on my third. I presently live and write in Chicago with my husband, our three children, two cats and a dog. When I'm not being a mom or writing, I fly as a First Officer on Boeing 767's and jet off to Europe or South America and a few other destinations -- all equally wonderful in that, while I'm there, I usually get to eat an entire meal sitting down."--Amazon

Email ThisBlogThis!Share to TwitterShare to FacebookShare to Pinterest
Labels: Down at the Goilden Coin, Kim Strickland, Wish Club, Y'all Jogs My Memories