The Power of Three 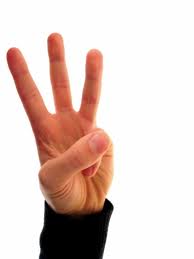 They say there’s power in numbers, and that’s very true … the more the merrier and all that.  But one of the most important numbers for a writer is the humble but powerful three.  People love it when things are grouped into thirds.


Don’t those pack more punch than “Lights, camera, sound, action!” or “Up and away!”


Somehow, lists that come in threes seem to resonate with us in a special way, rolling off the tongue with an appealing rhythm:


We embed the power of three in our classic stories: Goldilocks and the Three Bears; the three wishes a genie grants; the three ghosts in Dickens’ A Christmas Carol.


We’ve gone so far as to make virtually every movie, stage play and opera a series of three acts.  Without a beginning, middle and ending, a story has no recognizable framework.


Most well-crafted songs include verse, chorus and bridge.  A bridge, among other things, provides a reprieve from the other two and makes them that much more appreciated when they reappear.


Joke writers know the power of three, and use it to great advantage.  Not only does the power of three provide an abundance of setups (“A fireman, a policeman and a politician go into a bar…”), but the punchline is often delivered third in a series. (“Marriage has a ring to it: an engagement ring, a wedding ring, and suffering.”)

There’s just something magical about the number three.  It’s an easy number to work with, and much like the three doors contestants had to choose from on Let’s Make a Deal, it’s more interesting than two and less confusing than four.  In your plots, in your characters, in your narrative, let the power of three be one of your secret weapons to charm your reader when you’re writing this, that or the other.