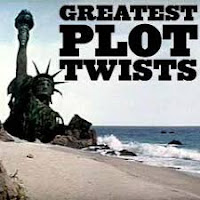 “That’s not her name.” A mama looks down at her new baby and tries to wrap that special name around the person now in her arms, but it doesn’t fit. That’s how I felt when I had about two-thirds of my novel, Finding Lady Enderly, drafted and done. It wasn’t the name that bothered me though, but the core of the story—the twist. It wasn’t that story’s ending, and it had to go.

The entire story idea actually grew out of the original twist. It started with Princess Diana, and my mother’s speculation that her death was faked so she could slip away to live on some island with the man she loved. Originally, that’s what had happened to our dear Lady Enderly who the heroine fears is kidnapped or murdered. But as I wrote it, and those vague characters became flesh on the page, that ending was such a bad fit—and it sort of felt familiar, like something I may have read before.

I blame Daphne Du Maurier for my addiction to unexpected endings, and I delight in attempting it.

Here are my secrets.
1.      I give about 70% of my manuscript to a handful of readers and have them guess at as many possible endings as they can. Then I throw them all away. I write something totally different and unexpected. I did this for my debut novel, Lady Jayne Disappears, and happily surprised many readers.
2.      For a manuscript that isn’t working, I outline the whole thing and mark where it turned trite, forced, or predictable. I throw in something wildly unexpected right there—even if I have no idea how it’ll play out. I let it ripple through the novel and see what comes of it! My second novel was rescued this way, and I had amazing, very touching scenes that included characters who were actually dead in the first draft.
3.      I turn my ending upside-down and challenge myself to make it work. Even if I don’t keep it that way, I often have lots of brilliant ideas to play with. I make the character I intended to be the villain into a victim of heart-rending proportions. I see where I’ve layered in assumptions and then prove them wrong in big ways. (Oh, you’re cancelling out this suspect and that one because they couldn’t possibly have killed your dad? Ok, that works. Except it wasn’t your dad who was murdered, but this person over here. Dad just died of natural causes.)

Joanna Davidson Politano writes historical novels of mystery and romance, including her debut Lady Jayne Disappears. She loves tales that capture the colorful, exquisite details in ordinary lives and is eager to hear anyone’s story. She lives with her husband and their two babies in a house in the woods near Lake Michigan and you can find her at www.jdpstories.com. Author website/blog: jdpstories.com - Social Media Links: www.facebook.com/joannadavidsonpolitano/  https://twitter.com/politano_joanna https://www.instagram.com/joannadavidsonpolitano/ https://www.bookbub.com/profile/joanna-davidson-politano