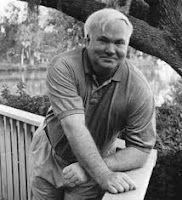 The late Pat Conroy (1945–2016) was perpetually instructing me to write a novel. But Pat told that to everyone. In his mind, every person he met held a novel or two just waiting to be written. I always assured Pat that nothing worthy of a novel had ever happened to me. Conroy, being Conroy, told me that one day I’d lose something dear to me and what I’d be left with in unfair trade was an overwhelming compulsion to write a novel—to try to understand why. That’s a terrifying thought, I told Pat.

We were both right. Now I’m writing this Microsoft Word document that keeps trying to convince me it’s a novel, and I’m writing it exactly for the reasons Pat predicted. In this would-be novel-in-progress, I needed a particularly vital scene to open with my newly crestfallen protagonist Charlie pulled from his routine, stranded for an undetermined time in an unfamiliar place, a setting devoid of any established connections, where he would be a stranger among strangers. A prolonged layover in the Toledo Express Airport provided all the above.

In this moment, Charlie could finally break open under the emotional weight of his dilemma (no spoilers here, gang) and have a confessional conversation with a fellow stranded traveler. He could tell his story in way he never would otherwise and to someone he would be meeting for the first time, without the burdens of shared history or consequence.

The hook of the scene was to be that Charlie, killing time in a small airport bar, meets a stranger with an uncanny (in the Freudian sense) resemblance to a character from Charlies’ own book, the book-within-a-book, leaving open the possibility that this is a moment of magical realism in which Charlie’s desperate need for a comforting presence manifests a familiar figure from his imagination. Or it’s coincidence, the random chance that an archetypal fictional character would have a real-world counterpart.

I’ve got the scene sorted, I’ve placed Charlie at the Toledo Express Airport bar, and I’m writing along at a good clip. But when Charlie turns to greet his new neighbor at the counter, it’s not the character I envisioned. She has apparently missed her casting call for this scene. Instead, seated next to Charlie is Kenny Rogers. The Kenny Rogers. The actual Kenny Rogers, The Gambler.” “The Coward of the County.” “You Decorated My Life.” “Love Will Turn You Around.” Some 120 hit singles over the span of a phenomenal country music career. That guy.

But here’s the peculiarity—as if it’s not peculiar enough as it is. I’m not a fan. I don’t generally think about Kenny Rogers. Or rather, I didn’t—until the storied Pulpwood Queens Book Club made “How the West Was Won” the theme of their annual Girlfriend Weekend in Jefferson, Texas, this past January, and threw in a country western artist costume component. In the guise of “Kenny Roget’s Thesaurus,” I attended the gathering in support of Our Prince of Scribes: Writers Remember Pat Conroy, an anthology I’ve been honored to co-edit with novelist Nicole Seitz featuring remembrances by 67 of our fellow writers who had also been mentored, befriended, and championed by Pat.

In anticipation of Girlfriend Weekend, I revisited the soundtrack of my childhood and the country artists who had been played most often in our house—Dolly Parton, Willie Nelson, Barbara Mandrell, Johnny Cash, and yes, Kenny Rogers. Looking back on it as an adult, Mr. Rogers’ oeuvre now seemed curiously complicated and contradictory. For every “She Believed in Me” there was a “Lucille,” for every “Through the Years” there was a “Daytime Friends (and Nighttime Lovers).” But what struck me even more was just what an impressive body of work his duets had been, most notably with Dottie West and Dollie Parton, but also Lynda Carter, Sheena Easton, Kim Carnes, and others.

In that context, let’s get back to our distraught Charlie in the bar in Toledo. (Ah, yes, the “bar in Toledo, across from the depot” …or in this case, across from the food court Subway.) Kenny Rogers dropped in, unexpectedly but perfectly, in this moment because his experiences as a duet singer, and particularly his transformative role as a kind of platonic soulmate to the late Dottie West, had imbued him with the wisdom Charlie most needed in this scene. And the absolute oddity of being seated next to a happily retired Kenny Rogers in an adorably small airport bar where no one recognizes him opened the welcome possibility of writing their conversation as a heartfelt homage to “The Gambler.” Kenny doesn’t “break even” in the end but Charlie does leave with some Rogers-esque advice, the “ace that I could keep,” which in turn charts the course to the novel’s much-improved conclusion. 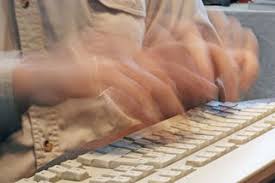 When that weird spontaneity of your writerly imagination seems to summon characters or settings or plot twists that you didn’t know you needed, or even in opposition to your intentions, trust it. The novel knows best, even when you’re not yet certain it is a novel. Show a little faith in the serendipity of the real and fictional characters who walk into your life in these opportune moments and turn you around. It’s a kind of magic, and that’s what they’re supposed to do. “There’s a wonder to it yet,” as Ron Rash wrote in his masterful story “Three A.M. and the Stars Were Out.” And there’s a purpose as well.

Pat Conroy once called to tell me about two wonderful ladies he had met earlier in the day by unexpected happenstance. We were twenty minutes into our conversation about these dynamic newly arrived women in Pat’s life when it finally dawned on me that he had made them up, that these were characters who had appeared to him anew in that day’s writing on his unfinished novel “The Storms of Aquarius.” I wish I could have called Pat to tell him about Charlie meeting Kenny Rogers in Toledo, but I can’t. So, I’m telling y’all instead.
____________________________________________________________ 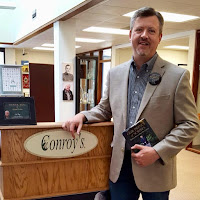 Jonathan Haupt is the executive director of the Pat Conroy Literary Center, the founding director of the annual Pat Conroy Literary Festival, and the former director of the University of South Carolina Press where he created the Story River Books southern fiction imprint with the late Pat Conroy. With novelist and artist Nicole Seitz, he is co-editor of the anthology Our Prince of Scribes: Writers Remember Pat Conroy, which was honored with the Silver Medal for Best Regional Nonfiction in the Southeast by the Independent Publisher Book Awards. Haupt’s articles, book reviews, and author interviews have appeared in the Charleston Post & Courier, Beaufort Lowcountry Weekly, Beaufort Lifestyle magazine, Pink magazine, Shrimp, Collards & Gritsmagazine, Fall Lines literary journal, and the Conroy Center’s Porch Talk blog. He serves as an associate producer and consultant to the SCETV author interview program By the River, on the board of directors of the South Carolina Academy of Authors and the Friends of South Carolina Libraries, on the American Writers Museum affiliates steering committee, and on the South Carolina Humanities advisory committee. He’s currently writing a Microsoft Word document that just might be a novel.

Email ThisBlogThis!Share to TwitterShare to FacebookShare to Pinterest
Labels: Everything Was Fine until Kenny Rogers Walked In—and then It Was Even Better, Girlfriend Weekend, Jonathan Haupt, Our Prince of Scribes: Writers Remember Pat Conroy, Pat Conroy