How Many Characters Does It Take?


No doubt you've heard the old joke, "How many (fill-in-the-blanks) does it take to change a lightbulb?" There are many variations, but one of my favorites is:

"How many mystery writers does it take to change a light bulb?"

"Two. One to screw it almost all the way in and the other to give it a twist at the end."

The question I will ponder today is one that writers face, whether consciously or subconsciously: How many characters does my story need?

I once attended a play performed by one solitary actress.  It was something about a trip to Europe, as I recall. What I remember most is that, as part of the story, she actually fried up some bacon and eggs on stage. I was glad I had eaten dinner beforehand or it might have turned into a two-person play.

Similarly, Hal Halbrook entertained audiences for five decades with his one-man show Mark Twain Tonight. From the above examples, it might seem as though only one character could be sufficient to tell a full-length story, and that can happen, but keep in mind that their narratives will usually include anecdotes that involve other people.

A sprawling Dickens novel, on the other hand, will weave in a generous cast of characters. David Copperfield and Oliver Twist, for example, include roles for ten major players each, with some sub-characters becoming more famous than the protagonist himself.

There are over fifty characters in the Lord of the Rings saga. Thank goodness we don't have to keep track of every one, but maintaining a working knowledge of the comings and goings of the main ten-plus while traversing the 455,125 words in this trilogy takes some doing.

That said, from classic dramas like Twelve Angry Men and The Dirty Dozen to campy comedies like It's a Mad, Mad, Mad, Mad World (which crammed as many celebrities of the day as they could afford), audiences have proven that they can handle a handful. The more recent The Hateful Eight and the upcoming Ocean's 8 might seem to suggest a trend toward slightly smaller ensembles, but who's counting.

The answer to our original question could well depend on how long the story is to be, and whether the length allows for some resolution for each of the major players. A short story only allows for one or two problems to solve, which can be accomplished with a very minimal cast.  If there are a dozen heroes, companions and enemies to address, more pages will be necessary to sort it all out and provide closure for each of the primary characters. (Secondary and incidental characters, of course, can slide.) 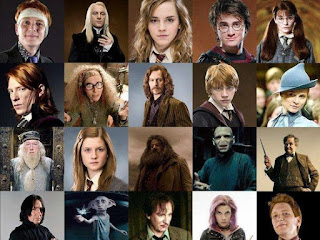 One important point, and it's amazing how often this is overlooked: No matter how many are in an ensemble cast, care should be taken to choose names that are distinct. A story that includes both a Carol and a Caroline is begging to confuse the reader.

Every character has their own story to tell, and each one you add becomes one more in the bigger picture. So as you may have already concluded, the simplest and best answer to the question of how many characters it takes to tell your story is: As many as it takes.