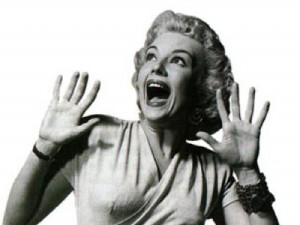 Even as I sit here writing, I'm hearing unseen sounds of baying wolves and creaking doors. It's coming from my neighbor's house across the way, who is testing the audio for his annual spook fest. He goes all out every Halloween and is the go-to house for all the kids in not just our neighborhood, but a bunch of others. I think they are brought in by bus.

My neighbor starts the preparation weeks before the big night, assembling his haunted grounds in late September, adding approximately one creature each day...a skeleton here, a Grim Reaper there. By mid-October, the few windows that aren't illuminated in black light purple have monstrous silhouettes shining through.  During this final week, he will construct a covered walkthrough leading up to his front door.  I don't know what the kids see when they brave this tunnel, but the continuous screams every October 31st suggest it's effective.

I got a much worse fright a few weeks ago when one of my external hard drives went silent.  I'm usually an obsessive backer-upper, with countless spindles of archive DVDs and external drives to back up my external drives.  But this was a fairly new drive I had purchased, and I figured backing up could safely wait a few weeks longer while I took care of other demands.

When the drive stopped being seen by my computer, my heart sank as I mentally calculated the large list of things I lost.  It included my most recent audio and video projects, writing works-in-progress, and—most regretful of all—family photos from the summer that could never be replaced.

It was a few days later, while charging my cellphone on a USB port, that I realized I had merely unplugged that drive, having mistaken its cord for my cellphone charger.  It's very possible that I danced a jig when I saw my files appear again, but I do know that the very next thing I did was start backing up everything in sight.

Others haven't been so lucky.  I spoke with an author friend just last month who lost a flash drive while on vacation.  Some of its contents, luckily, were backed up elsewhere, but too much of it is gone forever.  I read a blog post this week by another author who had just finished the first draft of her fourth novel. She barely had time to celebrate before the drive crashed. I can still feel the pain in her words, "I will never get those exact words back."

We all know people who've experienced this horror story. Maybe even you. In fact, it's much more likely that it has happened to you than it hasn't. 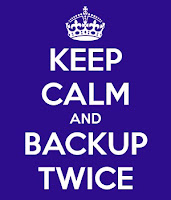 We're getting into the busiest part of the year, with holidays and families and year-end tasks of every description.  Don't let distractions become an excuse for not backing up your prized files. Think ahead to what it would be like to lose them, and you'll have plenty of motivation to take the five minutes here and there to do a flash drive or CD backup. Some authors copy their files to Google Drive or Dropbox for free; others pay for automatic backup via a cloud storage service.

Whichever method you choose, making a safety copy (or even two) of your important files will save you from the very real scare that can happen any day of the year.