Being Prepared for the Unexpected

Some time ago I wrote a blog about being prepared to sign your book when asked. It came to me from a story I had heard Pete Rose relate when asked about what kids playing baseball needed to learn that they were not being taught. He said they needed to be prepared to sign a baseball. It not only reinforces them for the possibility of playing professionally but it achieves the skill necessary to sign the curved surface. Pete Rose’s signature is one of the more legible signatures in baseball.

The other lesson on this came from my niece who was at the time a Dallas Cowboy Cheerleader. She had shared with me they were taught and practiced a precise wording and signature to use. They were taught to do so without variation. This established a standard that the organization required and prevented any sort of awkwardness on their part.

Over the years I found another area where I personally had failed to be prepared for, that being the unexpected meeting of a celebrity. After a few encounters with someone I admired, respected or was a fan of.  I decided I needed to come up with a phrase that didn’t sound ridiculous or embarrassing.

We all have heard of the fan meeting the celebrity and blurting out, “You are my biggest fan.” I hadn’t done that but had felt just as silly as someone who has. So I can up with something that seemed appropriate to me and have had the opportunity to use it many times. I have said what many people say when being introduced or just meeting anyone for the first time and that is, “What a pleasure to meet you.” Simple and it gives me time to think about what I may want to say next. If I see a celebrity and would like to introduce myself. I simply ask, “May I say hello?” I’ve yet to have anyone say no. But think how it would sound telling someone no you can’t tell me hello? I found this preparation most useful on two occasions.

In the early days of Southern Writers Magazine I was going on a vacation to Orange Beach, AL. I knew this was the hometown of bestselling author Andy Andrews so I jokingly told our staff while there I would look Andy up and get an interview. Now there was no way Andy would know me or our Magazine at the time because we had only come out with first issue and were not known. So one late evening I stopped in Wal-Mart for a few items and there Andy stood at the checkout counter with his two sons. I introduced myself and Andy ended up on the cover of our second issue. 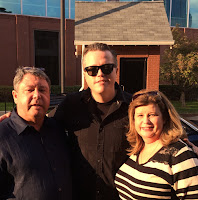 On another occasion I had purchased concert tickets to a concert at the Ryman Auditorium showcasing two of my favorite singer songwriters. The two were Jason Isbell, the Americana Music Artist, Album and Song winner of the year, and Paul Janeway of St Paul and the Broken Bones.  Entering the venue early for a quick tour of the building I ran into Paul Janeway. I introduced myself and we talked for a minute. I had my picture made as well and he was on his way to the dressing room. Minutes later as I was leaving the building up drove Jason Isbell and wife. In this case due to their busy unloading of the bags from their car and what I was afraid would be an interruption I asked permission to say hello. Sure I was told and we got to visit and again a photo. 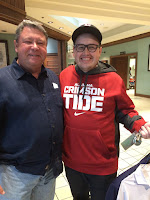 Having met two celebrities within minutes and each being someone I could have been so easily excited about meeting that I could embarrassed myself, I was glad for my preparation.  As your writing career takes you various places you should be prepared for meeting people weather it is signing autographs or asking for an autograph. Be as prepared as you possibly can and you should better present yourself as a writer or a fan.