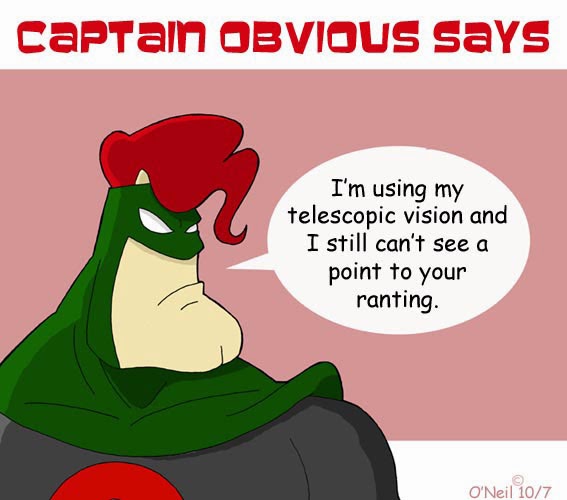 We've talked before on the blog about heavy-handed dialogue, the kind that intends to convey meaningful insight but instead winds up as clumsy or ill-timed exposition.  There are few quicker ways to jar an audience out of your fictional magnificence and snap them back to reality.

So how are we supposed to get essential details across without banging readers over the head with blatancy? Here are several ways those who've gone before us have done it:

1. Through the voice of an expert
A detective investigating a crime, a professor teaching a class, or two colleagues having a work discussion all have valid reason to go into details that might not appear in normal conversation. Even then, it's inadvisable to spill everything at once.  We've all seen confessions on TV shows that were too easily evoked and earnestly explained.

2. In the midst of a bigger distraction
In Jaws, when shark hunter Quint describes his horrifying experiences with maneaters to Chief Brody and oceanographer Hooper, it's nighttime in a boat and we're already anticipating toothy Bruce any minute now.  We're grateful for not only the opportunity to delay the terror, but also for the informative details that tell us what we're up against.

3. As a sidenote
At a wedding in The Godfather, Michael Corleone's girlfriend wants to know how it came to be that a famous singer is attending.  The resulting story reveals essential workings of the "family business" as well as the power of Michael's don dad. It comes across as a natural extension of the conversation.

4. In a hurry
"I only have a minute to tell you this," is a good excuse to unload a lot of info in a short amount of time. In Back to the Future, Marty learns about time machines, flux capacitors and plutonium in the time it takes for Libyan terrorists to show up.

5. That old favorite, Show Don't Tell
We could either devote unnecessary pages of dialogue to having a wallflower bemoan to her friends that she doesn't hit it off with guys and has a crummy car, or we can write a dramatic scene showing her striking out at a party and getting in a car that won't start.
In an adventure tale involving a superhero or a secret agent, we would rather see their futuristic gadgetry in action than hear about it.  If we already knew the Batmobile could turn into a boat, we wouldn't think "how cool is that" when it surprises us.

6. An eye for detail
The scenery itself has its own backstory to tell.  A reception area with perfect furniture and fresh flowers says success.  A city in ruins spells war.  A desk littered with books, papers and Oreos means you've seen my office.  Don't judge me. 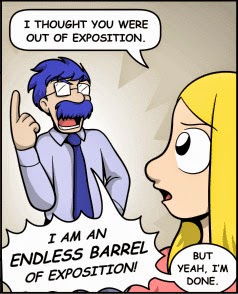 7. Do It Like Disney
Disney wastes no time revealing what the heroine wants.  We hear it all in their opening number.  While our novel's protagonist may not be able to burst into song, we can give a glimpse into the longings of his or her heart through the actions they take.  Checking the want ads, joining a gym, or working on a lab experiment after coworkers all go home give some indication of motivation.
First impressions are among the strongest, which makes the beginning of the story the ideal time to establish traits that can be subtly built upon over the course of the story.

The devil, as they say, may be in the details, but we can ease their arrival by creating non-forced moments in which to position our exposition.