Memoirs Made from Scratch 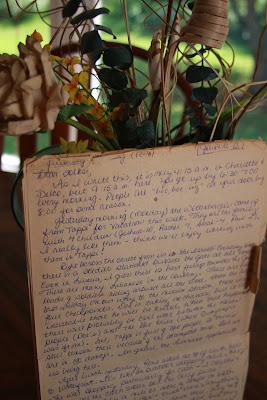 As a young missionary in the mid-1980‘s living thousands of miles from home, I had to find a way to communicate with family. Other than monthly conversations via ham radio, I wrote letters and kept extensive journals. In the evenings when there was generated power, I tapped away on my Selectric II typewriter (or wrote long-handed when there was no electricity). At twenty-eight years old, I had a two-year old daughter and was pregnant with my second while living in a remote town in Liberia, West Africa.

After living nearly twenty years in West Africa, the journals, some emotive and raw, were complete. Back in America as campus ministers, my parents gave me the gift of a lifetime: the folder of my journals and personal letters I had written to them. Their mandate was that I write our unique story for others to read. My heart was both touched with their belief in my ability to write out the adventures and fearful of how to start.

Over the following three years, I dabbled in the art of procrastination with the writing project. Some days I read through journals and letters for hours, making notes. In a gradual evolving of clarity, the plan of how to put the stories in written form came to me.

Below is a summary of my strategy:

Initially I made outlines of events in strict chronological order, but eventually a mixture of thematic tidiness blended in. Example: Stories pertaining to our three Christmases spent in Liberia, I included in one chapter.

At first, almost everything was incorporated into my draft except for the very ordinary entries or those where strong emotion was expressed. As a young missionary, my journals had been a safe place for me to vent about situations or people I was dealing with. Gradually, I deleted stories that were too bland or others that would do more harm than good if recited publicly.

There was a plethora of treasured stories about my daughters. Gleaning through dozens of kid stories, I cut many of them, though I did keep a few I thought would help explain cultural collisions while raising children on the mission field or show how a young mother might deal with life outside her comfort zone. The comments about my mothering stories (successes, failures, fears and struggles) and those few clips about my children have been a hit with my readers.  I’m inclined to believe if I would have included all of them, they may have become a nuisance. 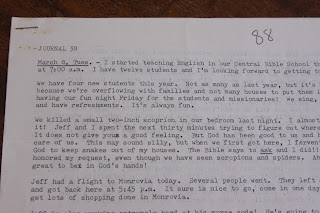 I had to balance the mundane with the extraordinary. If I would have deleted every mundane event and only included those that were unusual, the book may have lost its credibility with some readers. Life has its mundane moments no matter where you live. Sharing the ordinary with as much of my own voice helped paint the picture.

As I started writing and doing my read throughs (during the editing phase), more stories were cut or moved to different places. That part was tedious but helped the book to flow smoothly.

Making memoirs from scratch was a challenge. But, as I hold the books in my hand, I am content. My favorite comment from readers is this: Kim, when I was reading your book, I felt as if you were sitting across from me telling me the stories.

Kim L. Abernethy is author of In This Place and In Every Place, missionary memoirs written from candid and detailed journals of her family's years outside the United States. She and her husband Jeff have been missionaries since 1985 in Liberia and Ivory Coast, West Africa, with a short stint in Jamaica. In 2003, after a second African evacuation of home and ministry, the Abernethys became campus missionaries at UNC-Charlotte with Campus Bible Fellowship International. She is the proud grandmother of two beautiful granddaughters, Layna and Elyse. Kim is a Bible teacher, speaker, blogger, and semi-professional photographer. Follow her blog at http://ineveryplace.blogspot.com and visit her author's website at www.kimlabernethy.com.