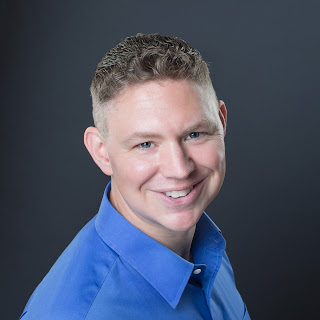 James is a former stealth pilot and is no stranger to secrets and adventure. He has been shot at, locked up with surface to air missiles, and chased down a winding German road by an armed terrorist. He is a two-time Silver Falchion award-winner for his Section 13 mysteries, a Thriller Award nominee for his Nick Baron covert ops series, and a Selah Award finalist for his Clandestine Service series. James is a rare multi-sense synesthete, meaning all of his senses intersect. He sees and feels sounds and smells and hears flashes of light. If he tells you the chocolate cake you offered smells blue and sticky, take it as a compliment.

Let's talk about your writing James. When did you start writing?

I've always been a writer and storyteller. At age four I told my parents I wanted to write books, and I had my first short story read over the radio at age twelve after winning a writing contest. Becoming an author was never in question, but I needed to experience life first. At seventeen, I joined the Air Force through the Air Force Academy, and the military left little time for writing. But it built up my reserve of experiences. It built up my understanding of people, leadership, technology, and the good and evil in the world. All these things prepared me for the day I set out to write a book and find a publisher.

Who were/are two of your favorite authors and do you feel they influenced you? In what way?

To me, the works of C.S. Lewis have a vibrancy rarely found anywhere else. His writing taught me the potential for beauty within an adventure tale, whether fantasy or suspense. His works also taught me the value of communicating a message—a truth—through story, and that is what I hope to do through Peter and Lisa’s adventures in Elysium Tide. After starting with C.S. Lewis, I began reading Tom Clancy at the age of twelve. Through his stories, I discovered my love for technology and suspense. Tom's work also helped me understand the art of weaving multiple plot threads together into a single, seamless tapestry.

What point in your writing career did you feel like you had gone from amateur to pro?

My first thriller, Wraith, came out from a small publisher. It wasn’t a great experience, but through that process, I managed to get the attention of Clive Cussler and Publishers Weekly. With praise from them, I finally landed an agent and a “Big Five” publisher who continued that Nick Baron series. The day I signed my first contract with Penguin Random House is the day I felt like a pro.

What do you look for in choosing a setting for your book?

I’d say settings are secondary for me thus far. The story arrives by inspiration, usually during my travels. In the case of Elysium Tide, I was visiting Maui with family and learned of two things: the island had a serious auto theft problem and the resorts offered “boondoggle” certification retreats for doctors. Those two pieces of information spawned the story, and the place where inspiration struck gave me the setting. From there, I let a big resort on the island inspire the over-the-top Elysium Grand from the book.

What steps if any are involved in research for your book?

Research is an ongoing process, but there are definite steps. If you don’t have a process, you can get bogged down in research, which is something I’ve written about in the past. Make an overview pass of topics related to your story. I use mind mapping for this. From the mind map, I determine the most important topics and dig deeper, looking for those that generate new ideas to give breadth to my story. The internet is not all-knowing. Invest in good, well-documented books if the story demands it. Books are self-limiting, but when heading down an internet rabbit hole, I’ll set a timer to prevent myself from getting lost in the research bog.

In writing your new book, what do you feel makes it stand out?

Elysium Tide comes to life with a gorgeous resort setting contrasted with a crime underworld. It also doesn’t take itself too seriously. Even though we’re dealing with weighty topics like life, death, and salvation, the characters manage to find and express humor in a way that early reviewers have connected with.

In your new book, what would you like the reader to feel and walk away with?

My hope is the readers will walk away entertained, encouraged, and equipped. Even Christians struggle with the idea of eternity and the fear of death. I hope that examining these topics through the eyes of an atheist neurosurgeon while he and his detective friend uncover a dangerous conspiracy brings them to light in a new way while giving readers tools for bolstering their own faith and reaching out to others.

What is the best writing advice you have received so far?

“It’s not a book. It’s a career.” That’s a quote from author Tom Young, and it’s the best practical advice I’ve ever received from an author. And to be clear, I’ve had face to face conversations and sat through seminars with many of the greats—Lee Child, Clive Cussler, James Patterson, and so on. Tom’s simple phrase is the one that stuck with me, and the one my wife and I repeat to each other often. Finish the story, let the publisher send it out, then get to work on the next one. The other great advice I follow came from my pastor, Dr. Jeremy Evans. “I only have a short time in this life to do God’s work. I’m going to use that time as best I can.”

What is the worst?

I had an employee of a publisher once suggest that I should violate my non-disclosures with the US Air Force to garner publicity for a series. I know that several have made this move—some with great success and no consequences. I won’t do it.

Between plotting, character development, dialogue, and scenes which is easiest for you, and which takes a lot of effort?

I like action. Action scenes flow quickly, and for that reason some new writers make the mistake of letting them run for pages and pages. If you do that, your action will eventually become boring to the reader. The harder part is combining narrative and dialogue (and sometimes action) to convey important story information and message to the reader. I call this the hermeneutics of writing, and it takes effort and training.

What is your schedule for writing?

I write when I can. I hold down a day job as an airline pilot, and my schedule is often unpredictable. Thus, I fight for every writing moment I can get. If you don’t, it won’t happen.

What do you do if you get stumped?

I used to go for long walks. Turns out, walking twelve miles per chapter for fifteen years can have a detrimental effect on your feet. I spent four months in a wheelchair, walked with a cane for a bit, then experienced a miraculous healing of my ligaments. I’m not going to waste that by making the same mistakes, so now I walk a little and then swing in a porch swing to get the creative juices flowing.

Did you or do you make any sacrifices to be a writer?

Daily. Financial. Career. Physical. I do this for ministry. Ministry without sacrifice doesn’t live up to its name.

Let’s be very honest. In the case of Elysium Tide, the publisher chose the genre. I gave them a range of options. They picked the proposal in the mystery genre, and that’s the one I wrote. In the case of my fantasy stories in the Lightraiders realm, that genre picked me. From the way I met the original owner of the 1980s game world to the incredible men and women who have come alongside me to carry its discipleship tools to a new generation, there is no other way to view it than “God is driving this boat.”

What is the best way you found to market your book?

Readers are the best marketing for a book. If you like a book, tell your friends, leave reviews on Amazon and Goodreads. Apart from that, the best marketing for a book in my genre is a traditional paid ad on a major source (FB or IG ads). Previously it was major newspapers. The best day of sales in my career came from a quarter-page ad in USA Today. I’m trying to serve the near-forgotten Christian men’s fiction market. If you want to reach men, reach them with ads, not blogs.


Did you actively build a network of readers and if so, how?

My reader network has grown organically. Recently, publishers have asked me to build networks in other ways and it seems to be costly and counterproductive. I think proponents of these methods (like “street teams”) are getting perceived positive results that are influenced by other sources such as crossflow sales and word of mouth from the authors books with other publishers. The street team phenomenon may also be unique to the romance genre, which is not my area.


Are you on the Social Media Highway and if so, do you schedule times to post?


Scheduling posts is a best practice. My average engagement per post goes up when I do it and drops when I don’t. But I’ve been inconsistent. I’ve hired someone to help with this. I’ll let you know how it goes.


What advice would you like to give new authors that would help them?

I don’t think I can out-advise those who’ve given me the best advice I mentioned in the previous question on this topic. So, let me repeat what they told me.

“I only have a short time in this life to do God’s work. I’m going to use that time as best I can.” Dr. Jeremy Evans. 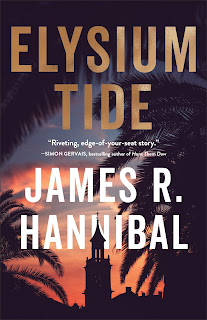 Thank you James and congratulations on your new book, Elysium Tide.
Visit James at www.jamesrhannibal.com .