Do Readers Love Reading Your Stories? A Hundred Years from Now?

When Hemingway wrote this novel, there were no
TV medical shows where the patient falls in love with his nurse. Although it is true, the main character was not the first patient to have a romantic interest in the nurse taking care of him.

Remember, Hemingway also had his own experiences. During WWI, he drove ambulances for the Italian Army and on a literary note, he was in the running for the best 20th Century American author.

“All you have to do is write one true sentence. Write the truest sentence that you know,” says Hemingway. And that he did. His life experiences were portrayed in his writing. They also formed him as a man.

What I like about his writing style is the simplicity. When I was young and began reading his books, I thought he used the same style in his different works. It made for easy reading. And his ability to write fiction while using bits and pieces from his own life and weaving them into his characters and story always touched me. He inspired me to want to write. 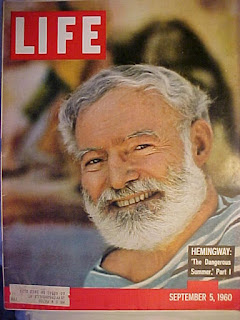 When I started reading his books, he was still living. He often showed up in the news reels played at the movies before the main feature. They showed him at the bull fights; dining with friends, who were celebrities, such as Ava Gardner, and others.

Hemingway was awarded the Nobel Prize in literature in 1954. They singled out his writing style as one of his foremost achievements.

As writers, we can look at our own writing styles. Read some things we ‘ve written. What can we do to enhance the possibilities that readers will enjoy reading our work a century from now?

Email ThisBlogThis!Share to TwitterShare to FacebookShare to Pinterest
Labels: A Farewell to Arms, Do Readers Love Reading Your Stories? A Hundred Years from Now?, Editor-in-Chief for Southern Writers Magazine, Ernest Hemingway, Susan Reichert